1750 miles later since leaving St Lucia, the boys cruised from
the Pearl Islands of Panama to Los Sueños, Costa Rica. 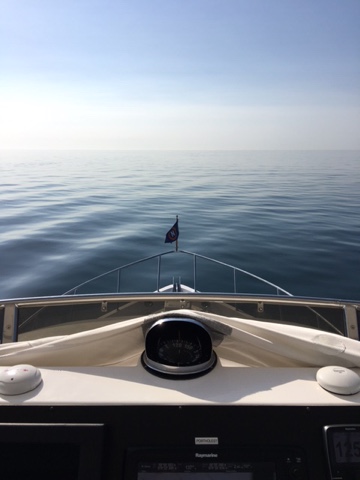 Here's an aerial view of the Los Sueños marina in Costa Rica.
You've never seen so many "fish killer" boats all in once place. Sport fishing is THE activity here. 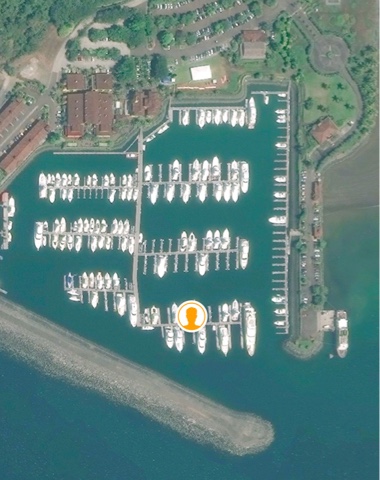 Brad & the gang arrived in Los Sueños and were tucked into a slip in no time flat.
The end of their long journey is almost here... They decided that after they left the Pearl Islands, they would spend a night in Los Sueños (which is north of Golifto / their final destination where the boat will be put on the freighter) so that they could have some fun zip lining, and the marina there was MUCH more accommodating...better restaurants and civilization since they had some time to kill as the Damgracht freighter was delayed. 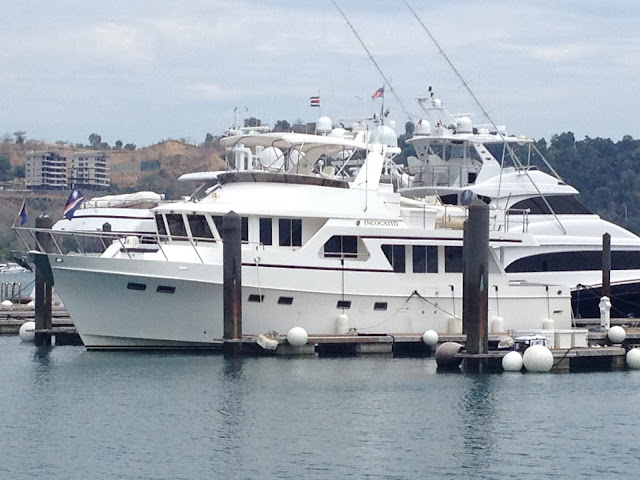 Almost every boat in Los Sueños is a fish killer / aka sport fisher. Dun, dun, dun.... 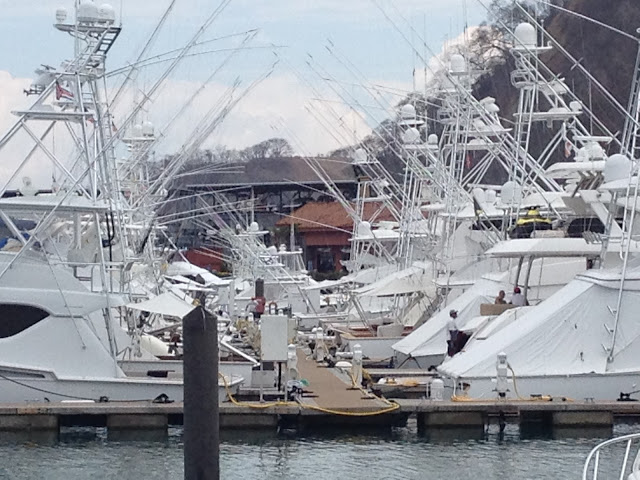 Los Sueños rush hour at 7am. Let the fishing begin! 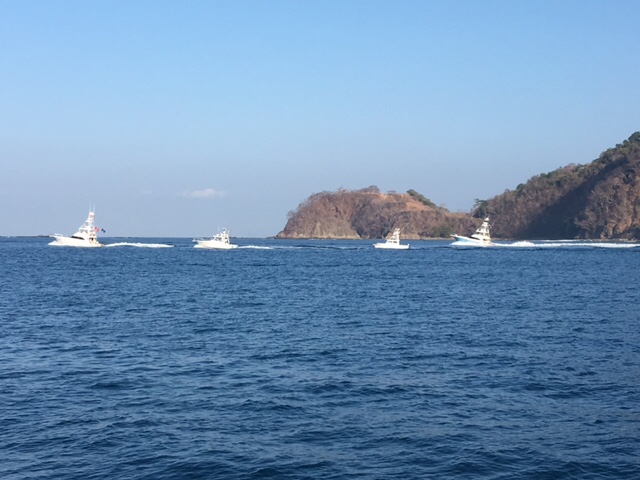 Later the next day the boys ventured over to the local croc pit o' death! Don't get too close...they aren't in a cage and there's no fence. Just a bunch of crazy crocs on the side of the road near a bridge. YIKES! People continuously stop at this bridge and feed the crocs raw chicken. Nom Nom. 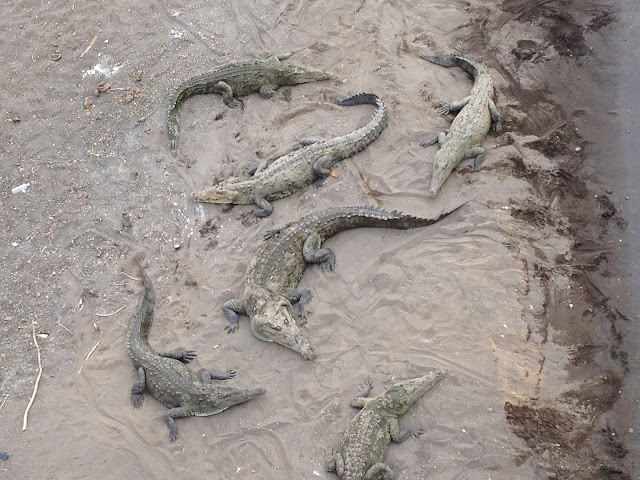 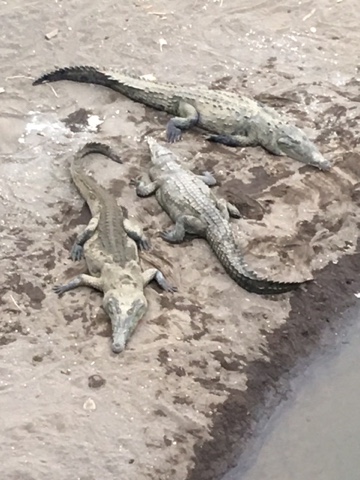 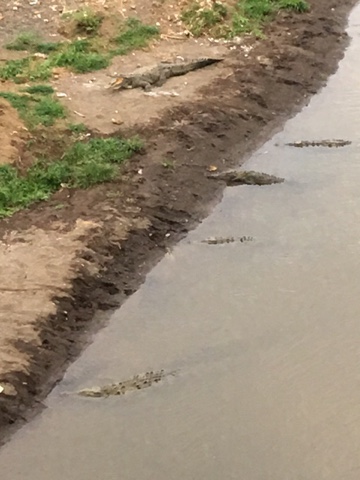 With time to spare while waiting for the freighter to arrive, it was time to stir it up.

The guys decided on the ultimate zip-line adventure in Los Sueños. 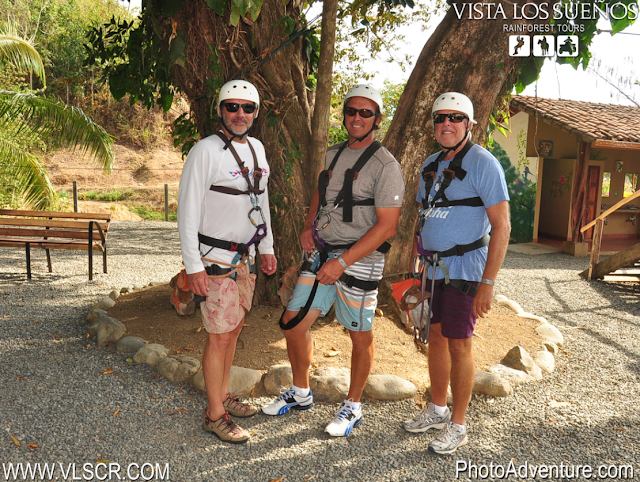 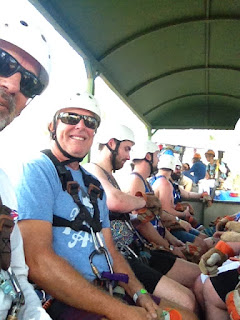 It was a sausage fest and humid as anything out! 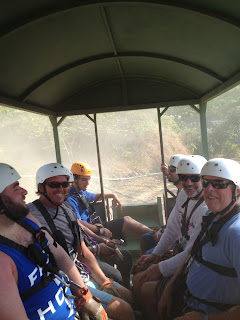 Here they are...all dolled up & ready for action! 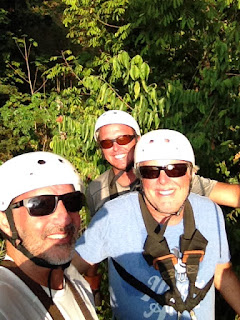 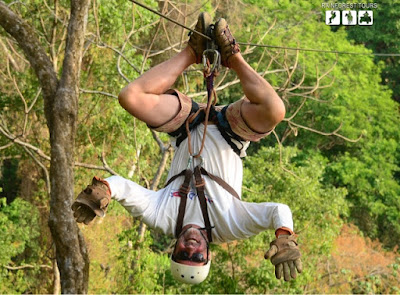 Bish has done this before. 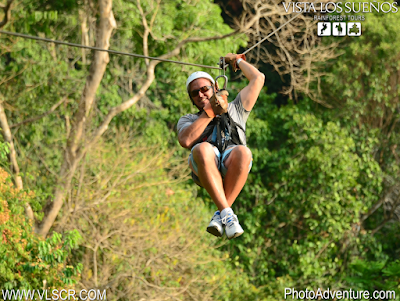 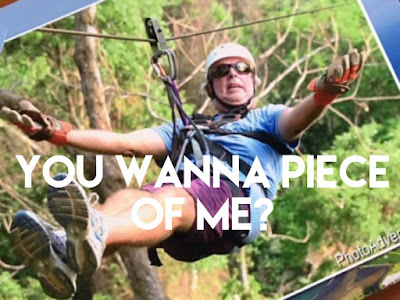 The boat stayed in Los Sueños for a few weeks. Brad & Jim flew home, and then Brad flew back 2 weeks later. Brad & Bish left the dock that evening and headed back south (yes, backtracking) to Golfito to meet the freighter for GO TIME!

The boys waited (and waited!) at Banana Bay Marina for TWO DAYS.

As for the task at hand, all was set for a 7am load in (finally!), however in these parts of the world we've gotten used to the tardiness. The freighter arrived, however the "loadmaster" (Insert corny joke here!) was still in Columbia and on a flight over. Eeesh.

That meant Brad and Bish wouldn't be able to catch their 2pm flight to San Jose and would have to get a driver for the 5 hours to San Jose in the dark. Bummer!

Here is the Damgracht freighter which will be shipping INCOGNITO home.
This is the SAME boat they followed behind through the canal..quite the coincidence! 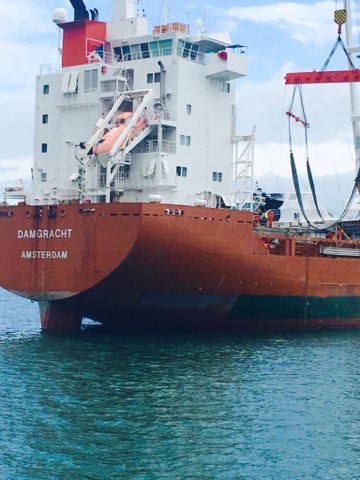 Other boats are staged with room to spare for us. 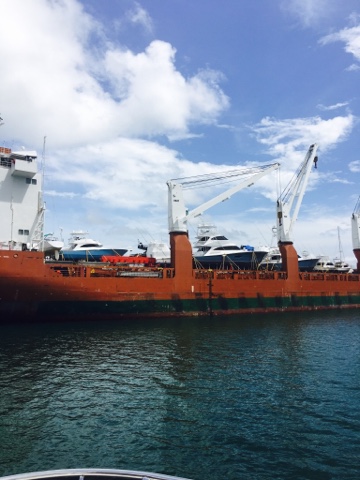 And FINALLY, the mighty crane was moved into place. 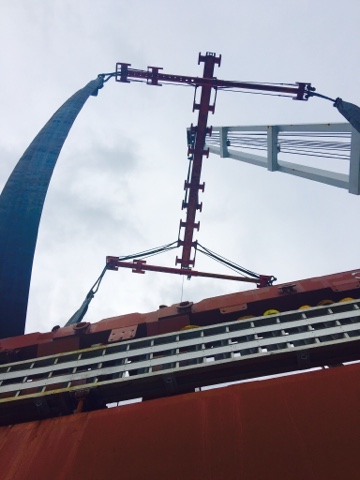 Brad brought our boat alongside the massive Damgracht. 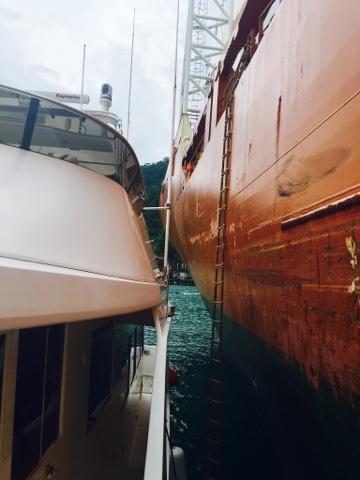 The cheering section...hold your applause. 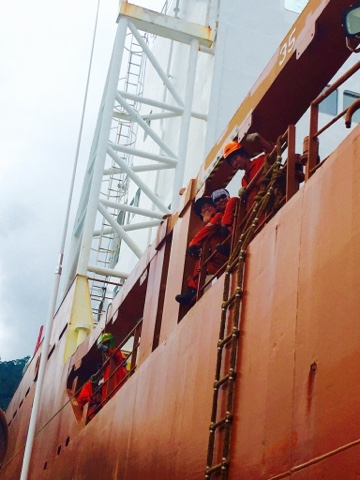 The workers were all staged & in place... 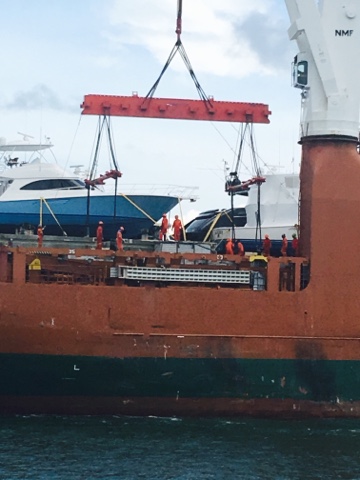 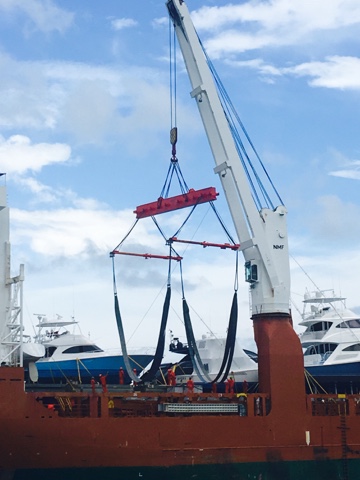 The engineer guides the crane as the boat is ever so gently loaded. 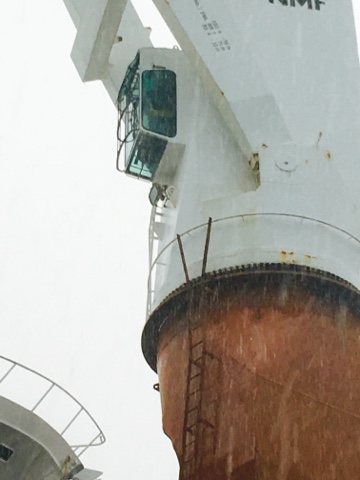 The boat loaded without issue. However the skies opened up and a downpour ensued. 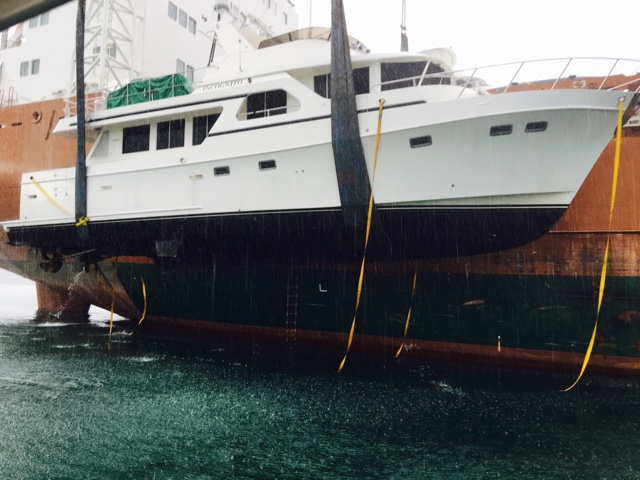 There she goes...take care of our baby! 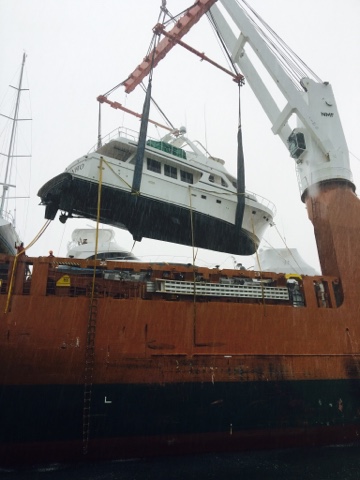 And then it really poured...a deluge of water fell upon them. 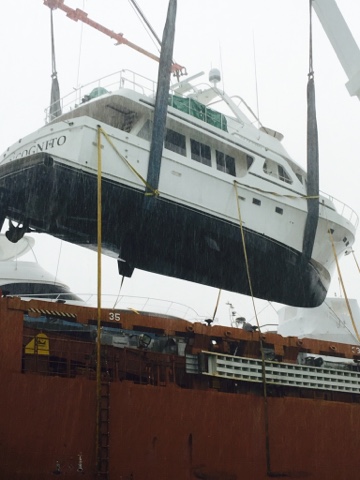 Great perspective as these workers guide INCOGNITO into place. Rain much? 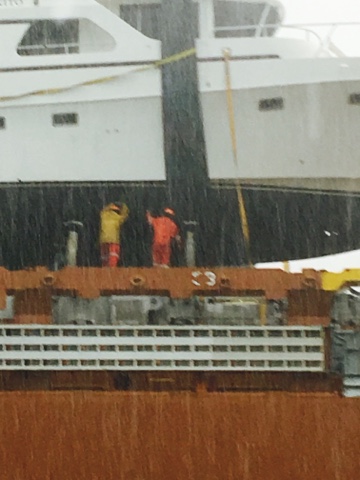 Our mighty INCOGNITO is finally loaded and ready to set sail... 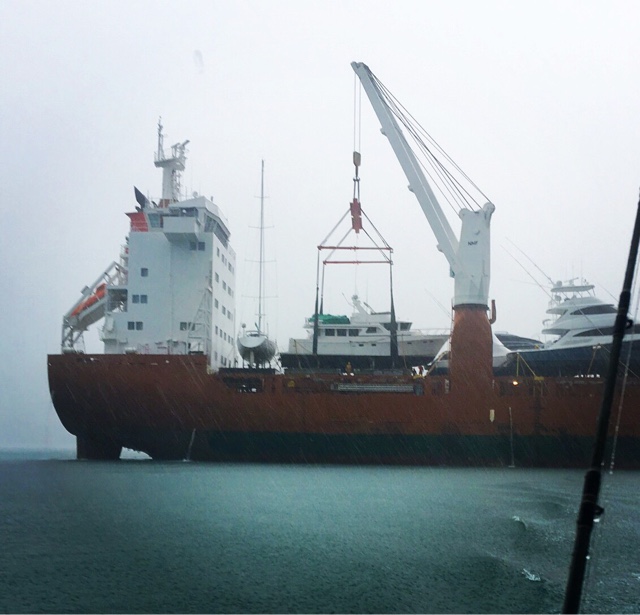 Brad stayed overnight in San Jose, Costa Rica and flew home the next day. We're almost done with our adventure, but one more chapter left as the freighter ships only to Ensenada, Mexico and we will fly down there to bring her home.
Posted by Unknown at 9:55 PM