Once again, the blog had a bug and didn't seem to post a few weeks back if you were subscribed via email. So, this post tardy, but enjoy nonetheless!

We weren't sure if this trip was going to commence on our planned departure date as Hurricane Erika was imposing herself on south Florida.

Luckily she behaved just in time and we were off!

We departed LAX on a Monday and had to connect in Washington DC in order to catch a puddle jumper to Norfolk, Virginia. 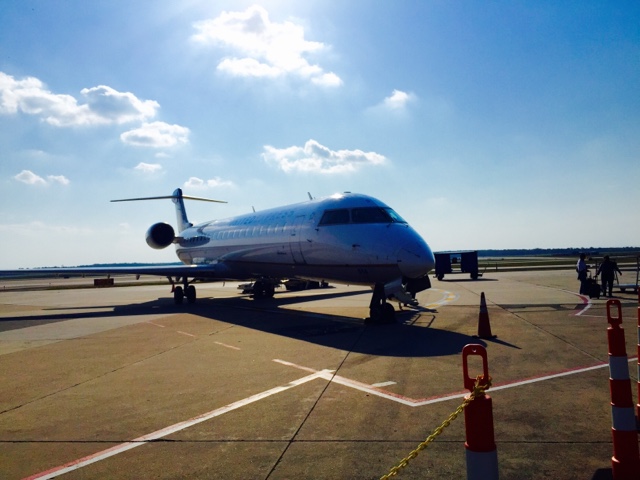 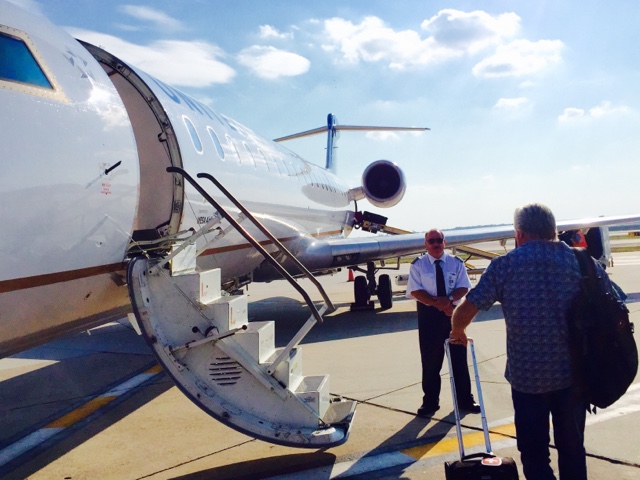 As we finally arrived to the Norfolk Marina after a long day of flying, we hopped aboard and fired up the boat engines...time to get our adventure on the road! 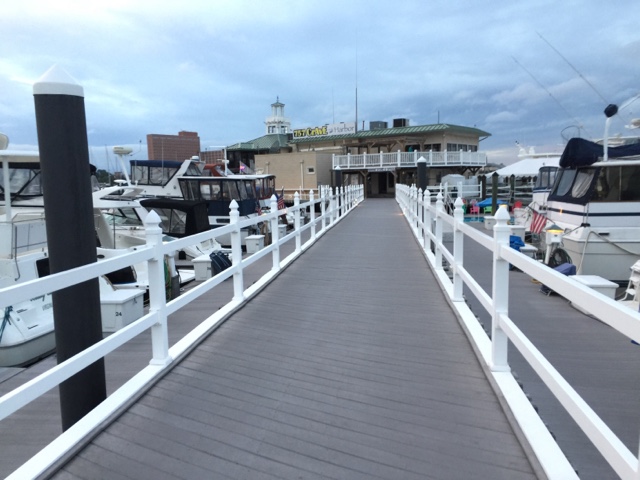 Bish had prepped a wonderful dinner for us and we left the marina just as the sun was setting. 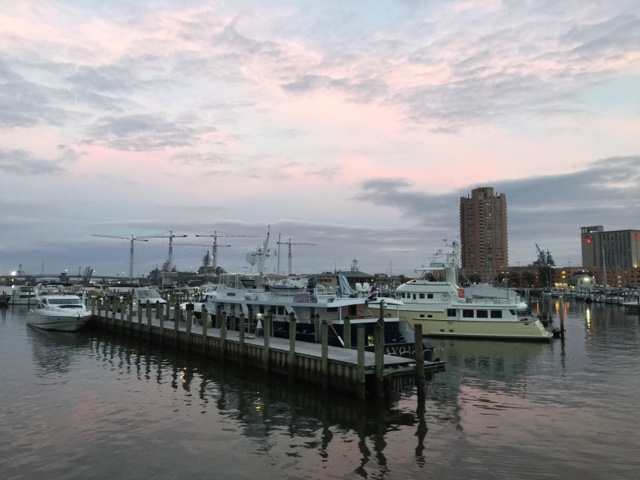 The weather was nice and balmy... Perfect for an evening cruise. 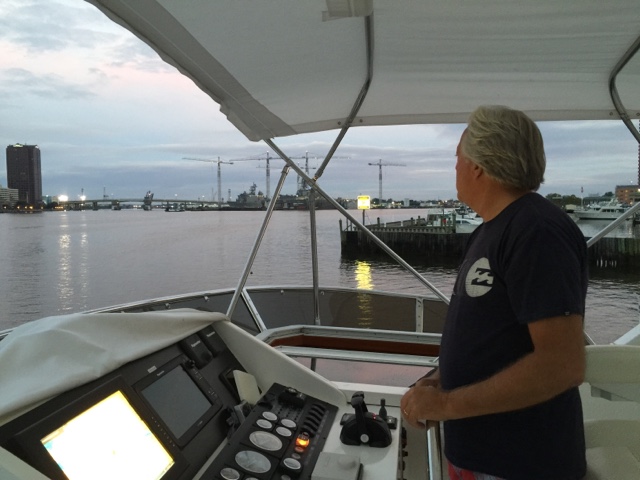 Brad was busy getting our route confirmed and mapping it all out. Brad is my spirit animal. 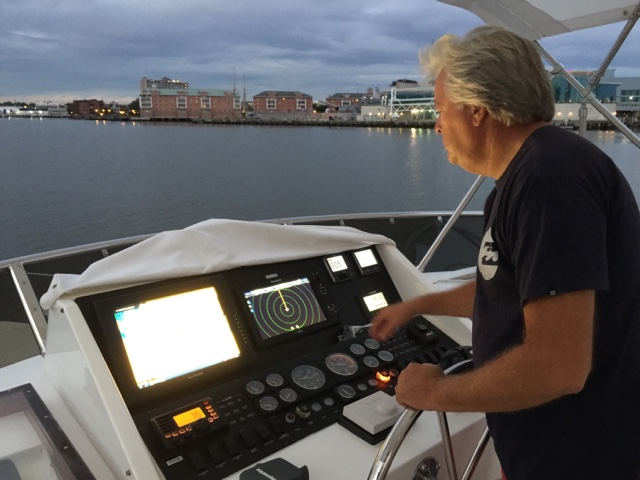 We were rushing to get out of the harbor before nightfall so that we could spot any potential hazards that wouldn't show up on our radar. Buh-bye crab pots!

About 5 hours later and still off the coast of Virgina, we witnessed live fire coming from two massive ships a few miles away. Yipes! Battleships?!

We quickly changed our course and turned on a dime, heading in a revised direction STAT! This was a first for us. Why hadn't they broadcasted their live fire practice to alert fellow boaters? Then, within minutes the US Navy was heard over the radio and we learned that they were having target practice out in the ocean & to keep a 3 mile distance from them. We were only 2 miles away, so we skedaddled! I hadn't seen anything close to this with the exception of the Pirates of the Caribbean ride at Disneyland. Haha! They had a lighted target that they shot at with out in the ocean. Watching this take place at night was so cool! Luckily they weren't having target practice with missiles, as they did the following day.

Tuesday, our first full day on the water was uneventful. The seas were quite lumpy with a south swell, but that soon flattened out for great cruising. We hardly saw another boat, as it was early in the season to be heading south. We knew we had a great window in between hurricanes and Brad had timed it perfectly. If we waited to head south the following month, seas would be much rougher and hurricanes could step up their game.
By early Wednesday morning, we arrived back in Charleston, North Carolina. We even arrived before the fuel dock opened which gave us time to get a morning walk in before we fueled up. Dawn patrol! 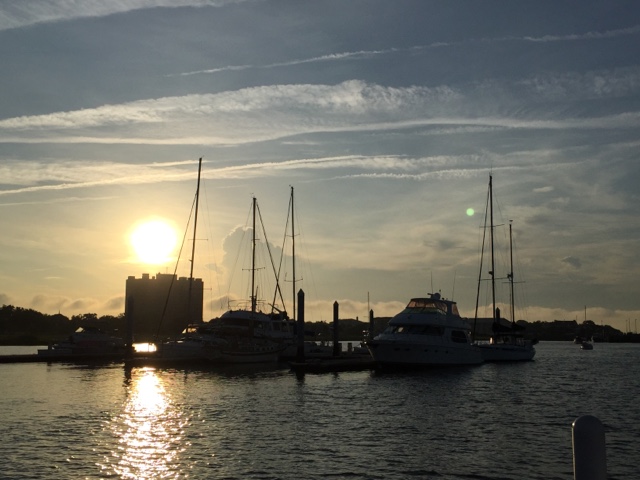 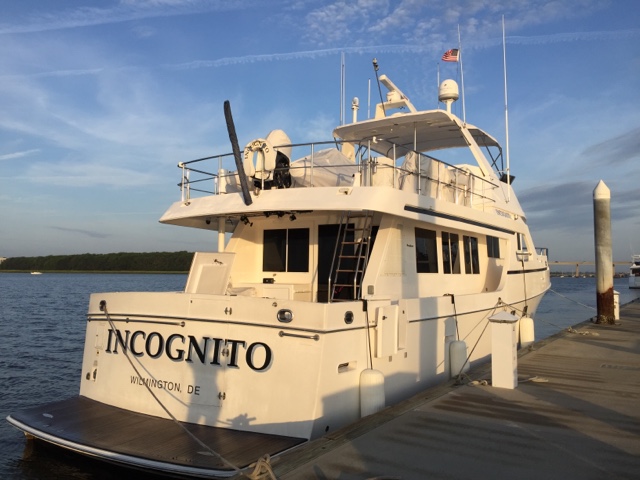 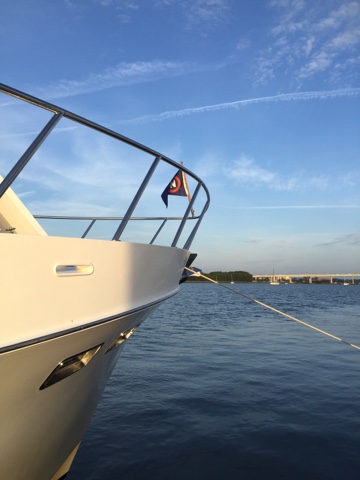 Back at the Megadock... Long as can be and not nearly as packed as the last time we were here. 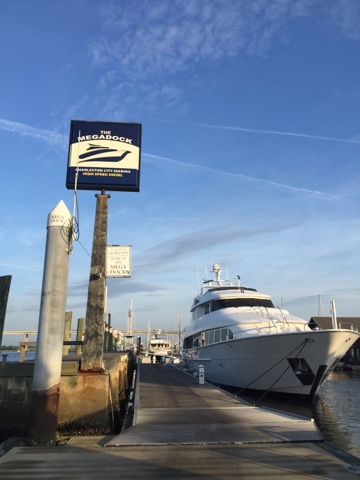 The marina was quiet as a mouse. 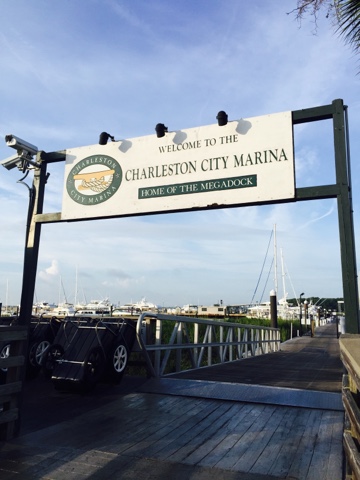 The colorful sailboats were all lined up and looking spiff. 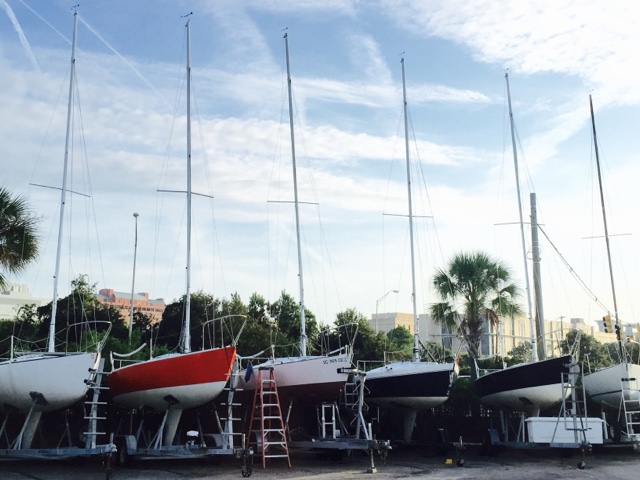 I was busy on my morning walk breaking rules. No one popped me either. Security! 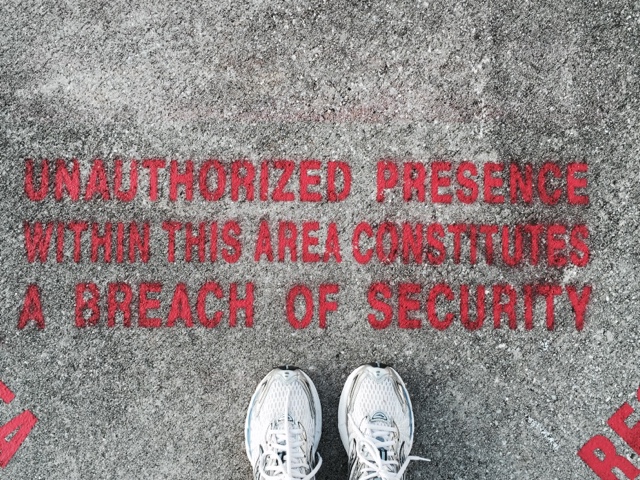 Walking forever in the sizzling morning sun wreaks havoc in this humidity.
I mean...I know its good for your skin and all, but the HAIR!

The yacht club was closed at this early hour. 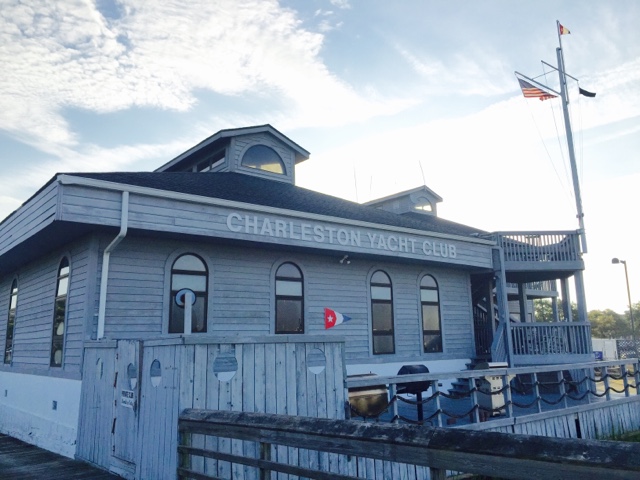 The bar in the boatyard was ready for business though. Too funny. 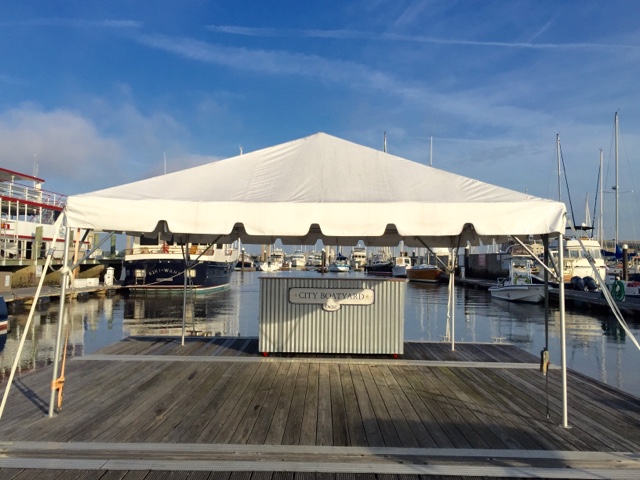 And the megadock continues... 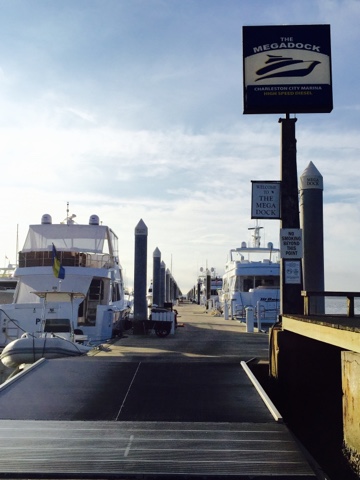 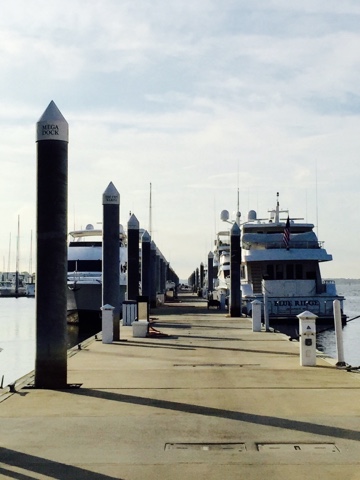 Morning mussle nibbles for the seagulls... 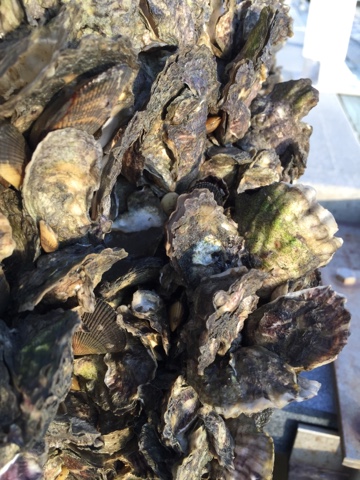 This meant the tide was out.

1500 gallons of fuel later, we headed back out to sea. Next stop...West Palm Beach, Florida.

En route to Florida and just 60 miles off the coast of Georgia, we were surprised to see that the ocean depth was only 150'. It was there that we checked the remnants of hurricane Erika on our radar. Luckily we are missing out on it!

Brad was right... The weather behind the dissipating hurricane was great. Seas were smooth as butter! 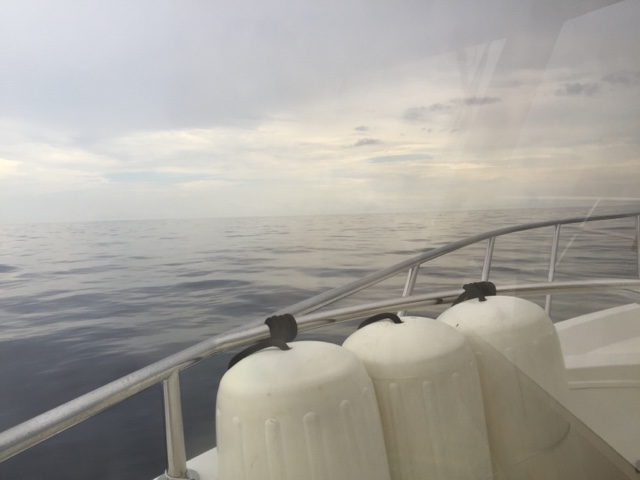 We normally run about 13 knots, however running against the gulfstream with a 5-6 knot current has us slowed down to 7-8 knots. Womp womp. Hard to believe that this vast ocean has a current. Brad had expertly calculated our fuel usage, so we won't be chancing our fuel and speeding up or adding onto our arrival time by circumnavigating the g-stream. A little (major) lightening storm offshore has provided a nice evening light show. 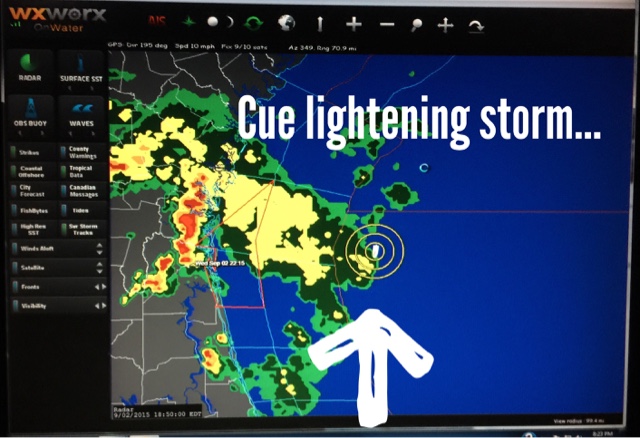 By 3:30am when I finished my "watch" and was off-duty from my late night captain duties, the gulfstream was dissipating and we were slowly speeding back up toward 13 knots. Yippe!
The sea temp is almost 90 degrees. E-gads! No wonder oodles of sharks are swarming our beaches.

We pulled into West Palm Beach just as the sun was setting. Thunder clouds are de rigeur this time of year. 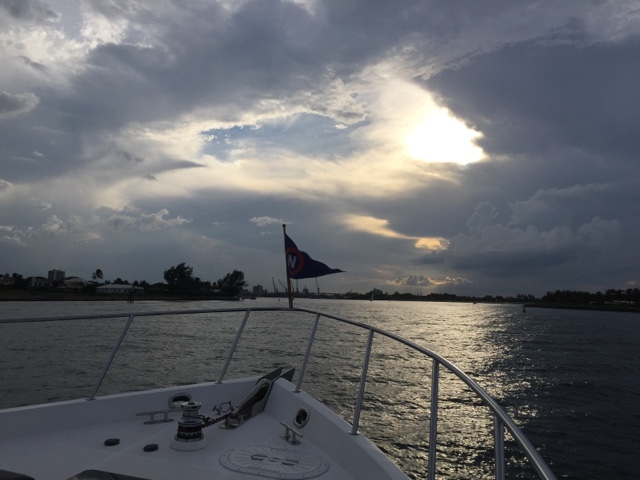 And we had to cruise below 5 knots as the harbor is full of manatees. 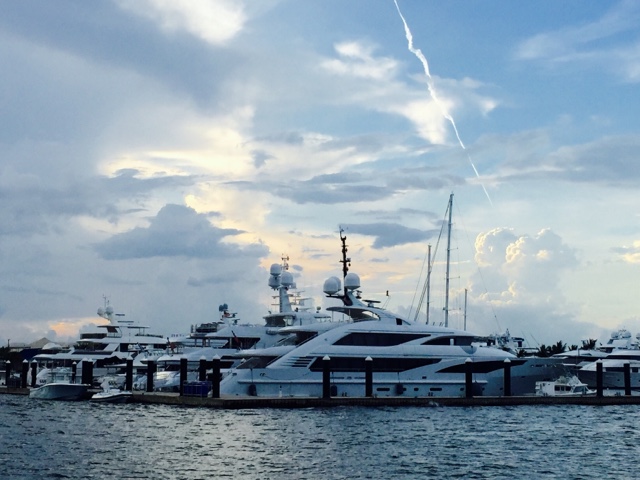 And what's that? Yes, another bridge opening we had to wait for... Par for the course in Florida.
Flagler Bridge baby! 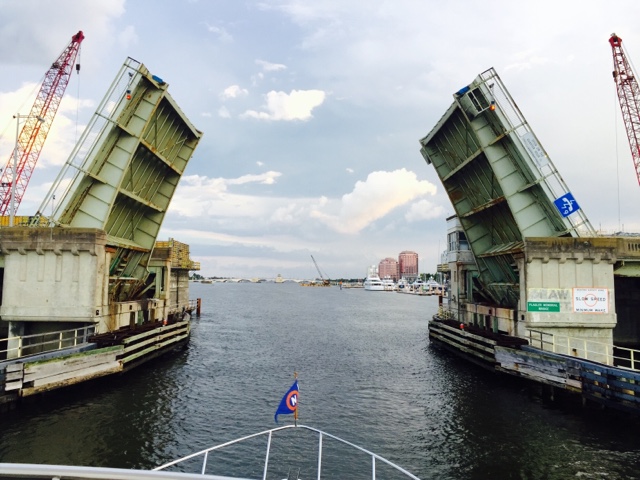 Finally, after a 3 day and 800 mile "dive bomb" run from Virginia, to swampy Florida...we are all tucked into our slip. 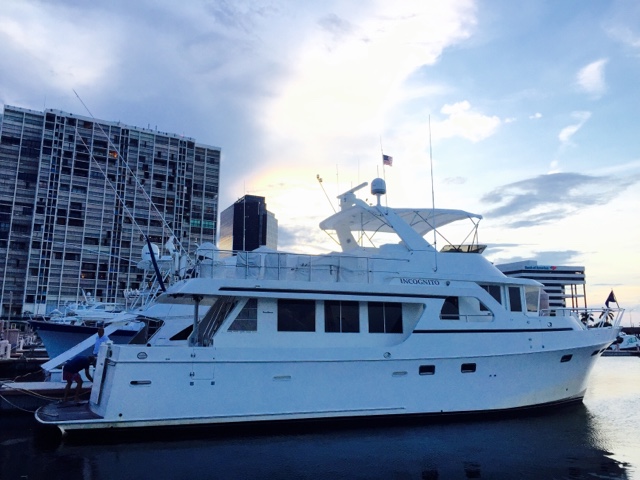 I was caught out in it and got soaked to the bone.
Thought I was going to get blowin' away or struck by lightening.
Turns out this is a daily occurrence in the summer. Everyone seems to know that you don't go out between the hours of 3-5pm. Too funny.
After the storm... 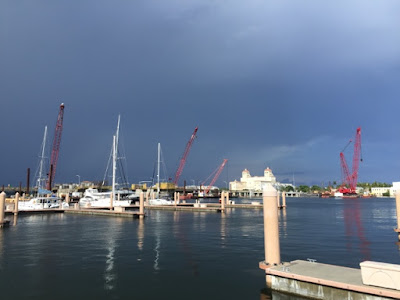 It was HOT & mc nasty sticky out...and what could I do about it? Nada.

The US / east coast portion of our adventure is complete. We've now traversed 11,000 miles of our 20,000 mile adventure. We absolutely loved every minute of it and have been lucky that our boat has worked flawlessly on such a long journey.
Let the happy dance commence & shake it like a Polaroid picture!

Our next voyage will head south to the Caribbean where we plan to journey as far south as the Grenadines which is just above the top of South America.  Can't even wait!

Posted by Unknown at 4:42 PM No comments:

Subscribe To Our Blog By Typing Your Email Address Here!