Aruba to Panama Canal, via Columbia!

Prior to departing Aruba, Brad spoke with the marina manager there about staying away from or going closer to the shoreline of Columbia on their way to the Canal.  The manager stated that all the boating problems in Columbia stopped about eight years ago. PHEW! Their Coast Guard is very active in the area and have shut down problems with boats cruising by...they keep a good eye out...

He also stated that they should absolutely head as close as possible to Baranquilla, and transit only during the day since the river there spills out lots of garbage, logs, etc and the trash extends over 100 miles out into the sea. If you stay close to the mouth of the river you only have to keep an extra sharp lookout for the ten miles that you pass by. If you are far enough out, the debris from the river fans out and is a navigational hazard for 100 miles side to side.

That would mean they would be transiting part of that at night and they didn't have any interest in that. Brad, Jim & Bish were now ready to get their cruise underway! 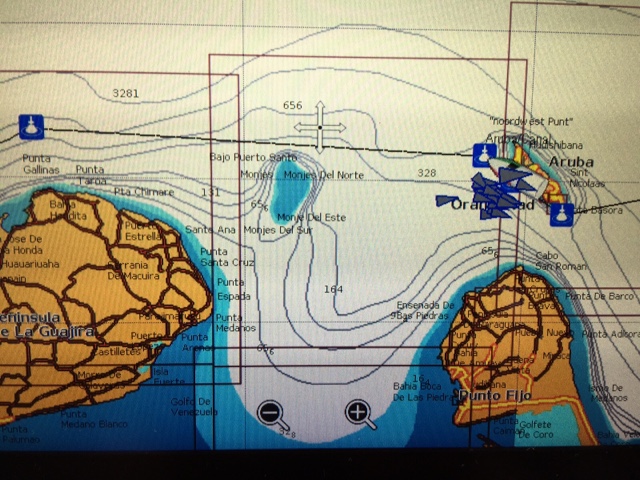 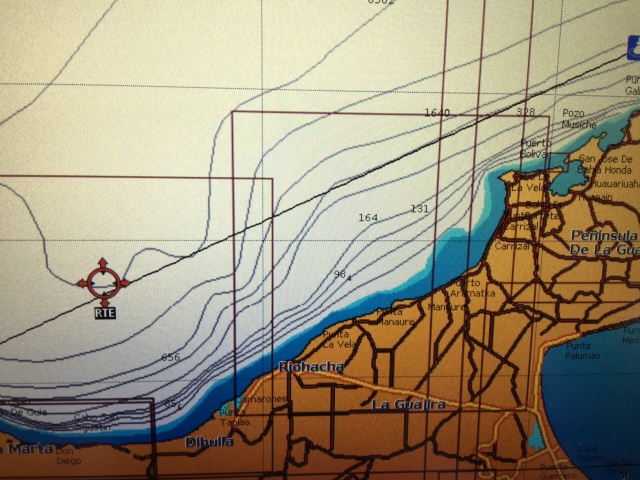 Along the top of Columbia below... 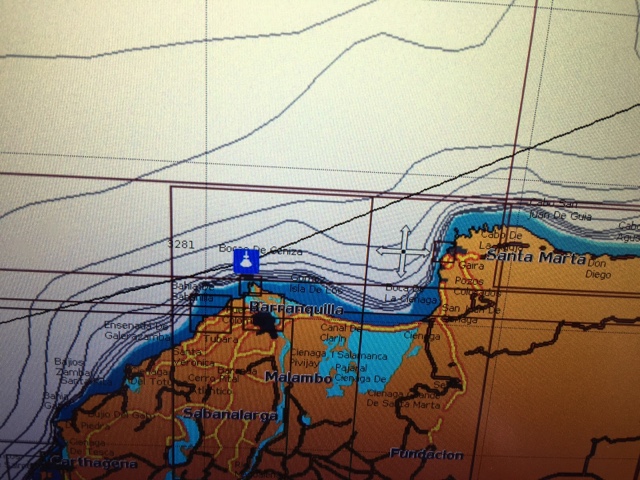 The route to the Panama Canal... 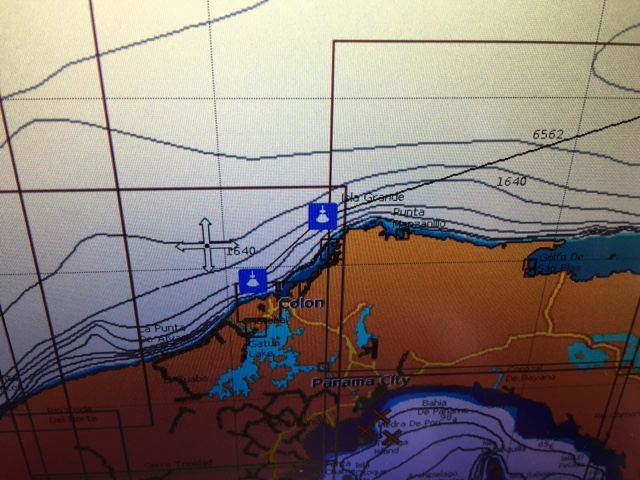 This map may give you a better perspective...

They were eight miles from shore when they passed the mouth of the Magdalena River (yes, named after Mary Magdalene) in Columbia. You could still see a distinct line between the clear blue sea and the dirty river water as they approached. 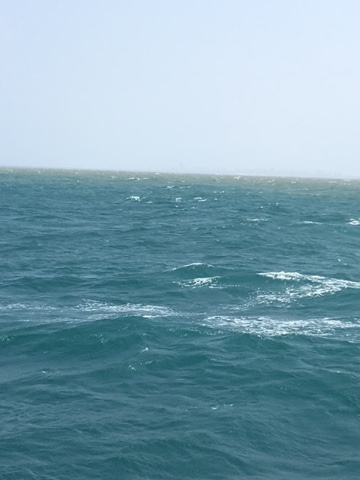 A photo from space showing this silty phenomenon. 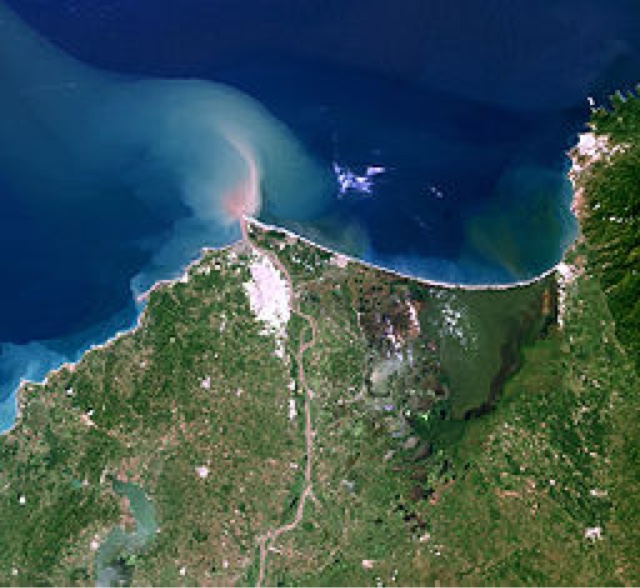 The Magdalena River is the principal river of Colombia, flowing northward about 1,528 kilometres (949 mi) through the western half of the country. It takes its name from the biblical figure Mary Magdalene. It is navigable through much of its lower reaches, in spite of the shifting sand bars at the mouth of its delta, as far as Honda, at the downstream base of its rapids. It flows through the Magdalena River Valley. Its drainage basin covers a surface of 27.3 million hectares (105,000 sq mi), which is 24% of the country's area and where 66% of its population lives.

Tuna sashimi here we come! Jim caught this Tuna after sundown and brought it onto the boat in the dark. That takes talent! He caught two at the same time but the second sadly got away. 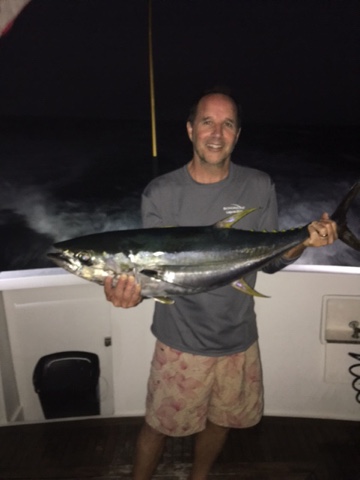 They enjoyed some yummy seared tuna that night for dinner which Bish prepared. 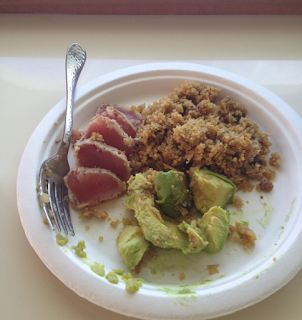 The photo below shows the boat rolling which was a typical side-to-side motion the whole time as they were pushed by following seas from the rear quarter.  This is an easy roll. The rough rolls had everything inside the boat flying everywhere! 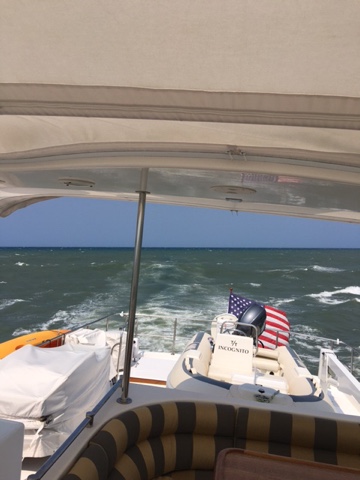 Brad was loving the adventure. No shock there! 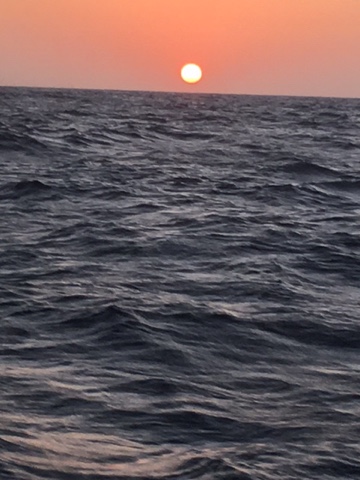 Then...there was an adventure they hadn't counted on..DUN DUN DUN....

They spent the night on the 8-12' seas which turned into a washing machine!

Everything in the boat flew everywhere it could. Waves were forcing themselves over the gunnel and filled the entire rear cockpit.  Out of nowhere in the pitch black of night, a massive rouge wave from a completely different direction spun them around 180 degrees.

All the guys were knocked to the floor of the pilot house, and it left everyone stunned. Luckily, no one was hurt! As Brad explained this experience to me via SAT phone, he said the boat was knocked completely on it's side and then righted itself. I think I had a mini panic attack hearing this nugget.

Ack! Brad said after all his years and thousands upon thousands of ocean adventuring mileage, he'd never experienced anything like it. And finally, they arrived at the Panama Canal! 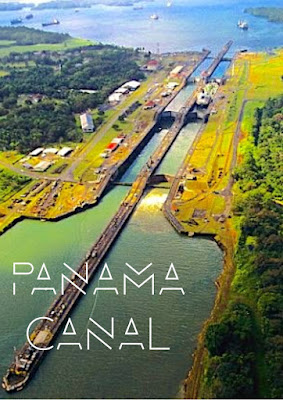 When there's something' strange, in your neighborhood...who ya' gonna call?