For those of you just receiving this post, please know that my blog got sick (a virus! lol)

and it's taken a little time to get it back and working. Some recent posts are only online and wouldn't update via email, so feel free to check the website www.incognitoboat.com if you have an interest. This post is many months behind, but better late than never!

Brad left home on a red-eye flight and was headed back to St Lucia without me. I loved to see the twinkle in his eye as I knew he could smell the adventure on the wind! He was ready for anything...

My travels ended with our last trip and the rest would be up to the men to get our beloved INCOGNITO home.

Brad arrived the next afternoon and both he and our captain Bish readied the boat for departure.
Brad & Bish departed early the next morning at 5:30am and were soon underway...

Brad called me at the end of their first day at sea from our Sat phone to give me their lat/long coordinates and report sea conditions. A safety precaution and one I sure appreciate! I kept copious notes on their locations every time he called me.
They would be at sea for 2 1/2 days underway until they arrived in Aruba. 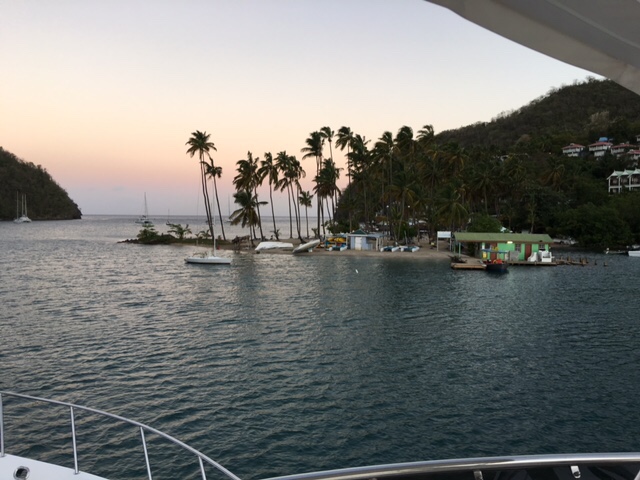 A view of the Petons as they passed by... 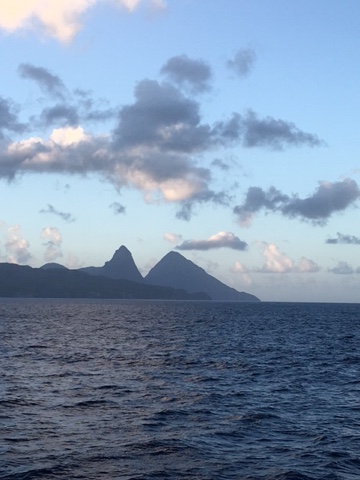 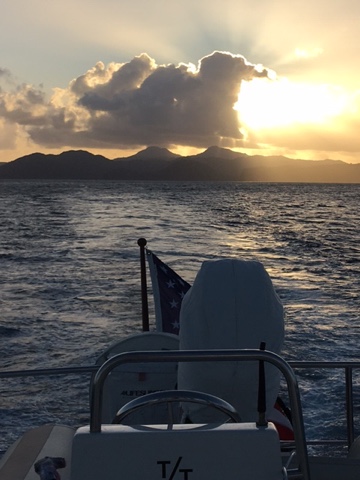 A little flying fish came aboard to say hello... 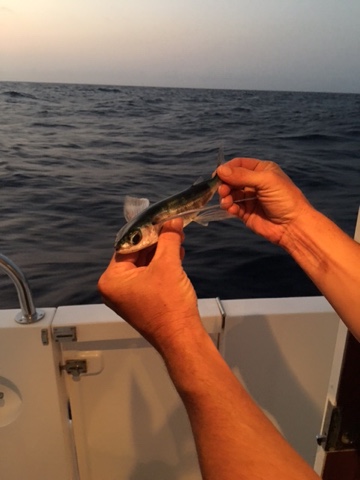 They had a beautiful sunset at the end of their first day... 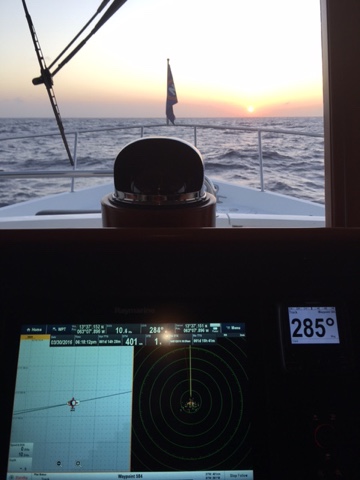 And their second day... 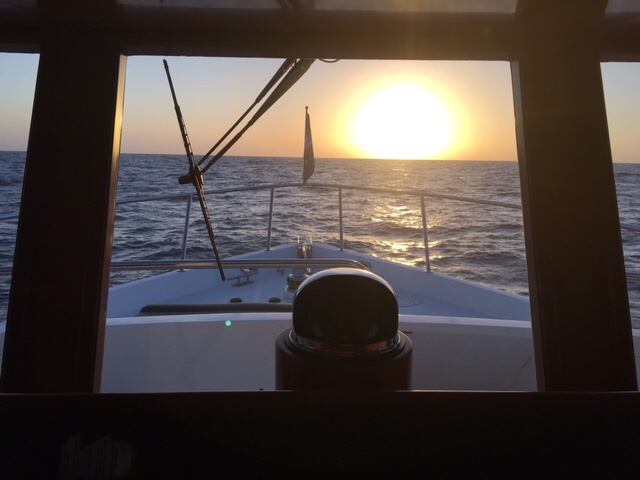 Finally, they arrived on the island of Aruba which is part of
the ABC islands and just above Venezuela. (ABC = Aruba, Bonaire & Curacao).
Thank goodness they steered clear of Venezuela as that country has such instability, and piracy is often bound to happen if you venture too close. People are extremely desperate there. 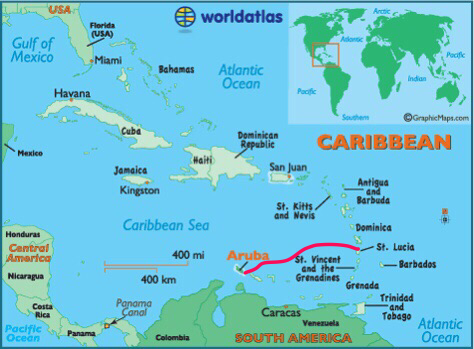 I know I breathed a sigh of relief to hear they arrived at the customs dock in Aruba safe & sound!
PHEW!!

It wasn't exactly picturesque as St. Lucia, however this is just the customs dock. 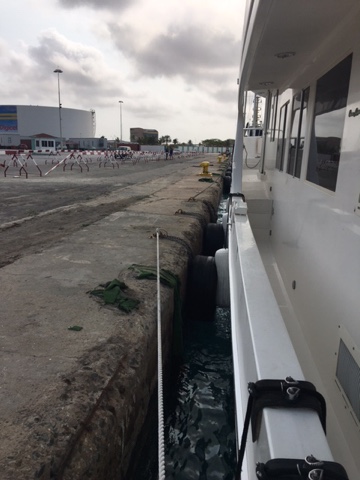 All tucked into their slip. 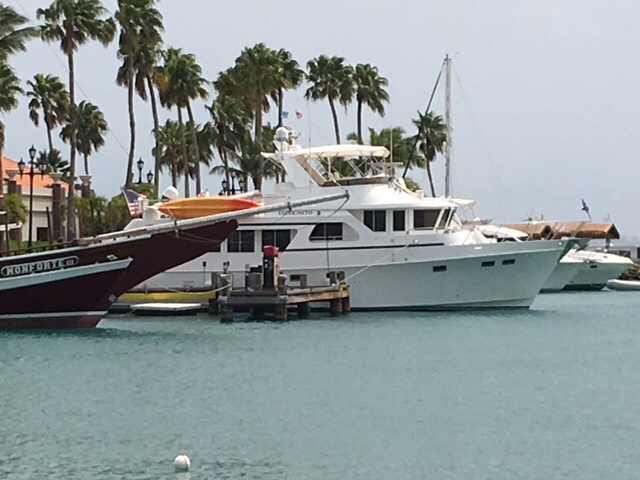 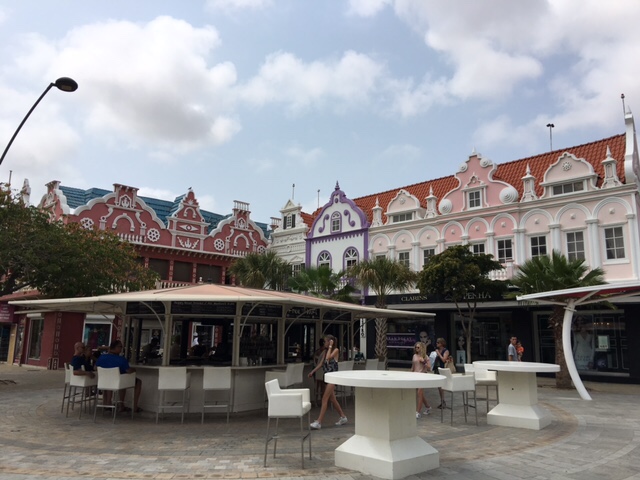 Here's a little history courtesy of Wikipedia for you to peruse;
Aruba (/əˈruːbə/ ə-roo-bə; Dutch: [aːˈrubaː]) is a constituent country of the Kingdom of the Netherlands in the southern Caribbean Sea, located about 1,600 kilometres (990 mi) west of the main part of the Lesser Antillesand 29 kilometres (18 mi)[5] north of the coast of Venezuela. It measures 32 kilometres (20 mi) long from its northwestern to its southeastern end and 10 kilometres (6 mi) across at its widest point.[5] Together with Bonaireand Curaçao, Aruba forms a group referred to as the ABC islands. Collectively, Aruba and the other Dutch islands in the Caribbean are often called the Dutch Caribbean.
Aruba is one of the four countries that form the Kingdom of the Netherlands, along with the Netherlands, Curaçao and Sint Maarten. The citizens of these countries all share a single nationality: Dutch. Aruba has no administrative subdivisions, but, for census purposes, is divided into eight regions. Its capital is Oranjestad.
Unlike much of the Caribbean region, Aruba has a dry climate and an arid, cactus-strewn landscape. This climate has helped tourism as visitors to the island can reliably expect warm, sunny weather. It has a land area of 179 km2 (69.1 sq mi) and is densely populated, with a total of 102,484 inhabitants at the 2010 Census. It lies outside Hurricane Alley.
The official languages are Dutch and – since 2003 – Papiamento. Papiamento is the predominant language on Aruba. It is a creole language, spoken on Aruba, Bonaire, and Curaçao, that incorporates words from Portuguese, West African languages, Dutch, and Spanish. English is known by many; its usage has grown due to tourism. Other common languages spoken, based on the size of their community, are Portuguese, Chinese, German, Spanish, and French.

The guys had fun checking out the sights, albeit Brad knew his way
around as he had been here on the first Chasing the Sun Tour. 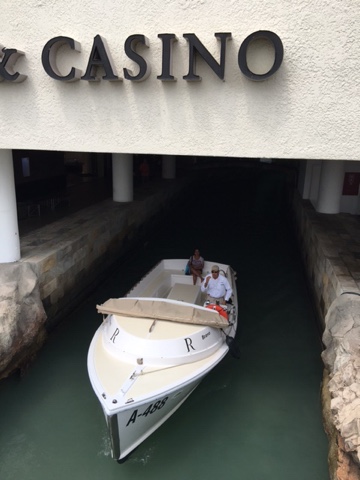 The canal for the water taxi back to the boat. 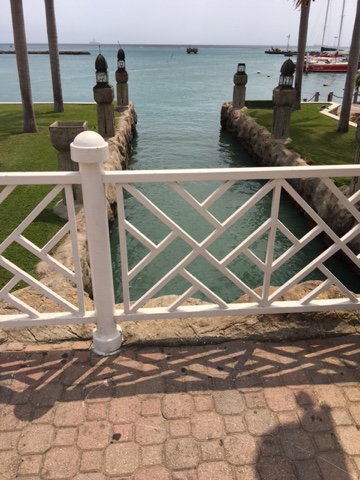 Nothing more important than a grocery store run, and all these limes meant only one thing... 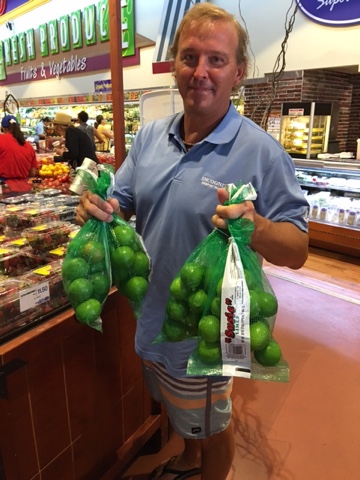 That they were preparing for the arrival of Brad's friend Jim.

Margaritas were in order!

After a night of fanfare, the next morning Brad & Jim went
on a off-road adventure ride with this group... 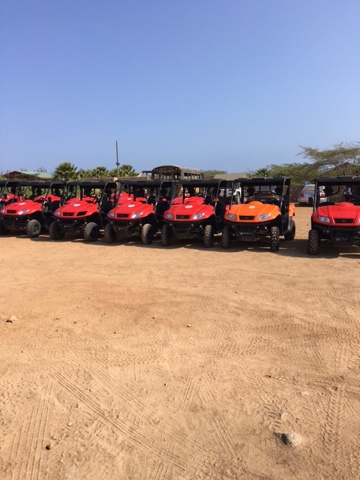 They were ready for action...

Here's a view of the ocean from the old mine building they toured. This is the first church built on Aruba, sometime around 1750. 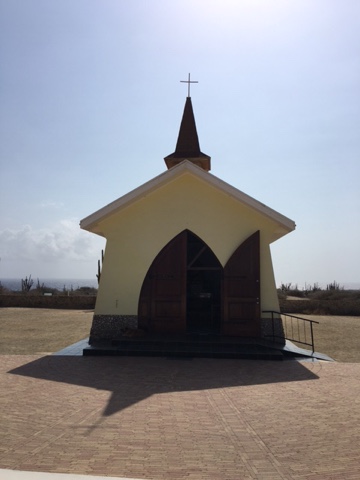 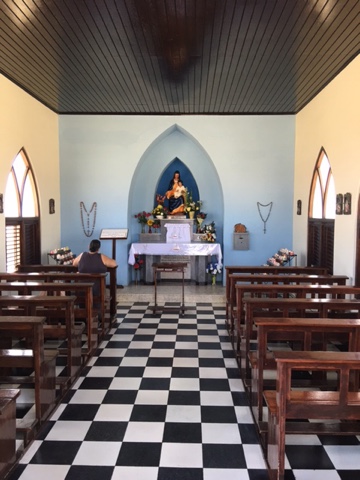 These handsome boys are out adventuring... 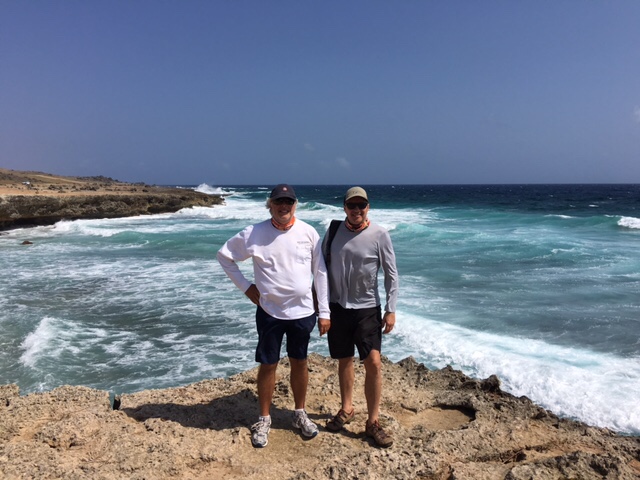 Brad is closely inspecting the minerals.... 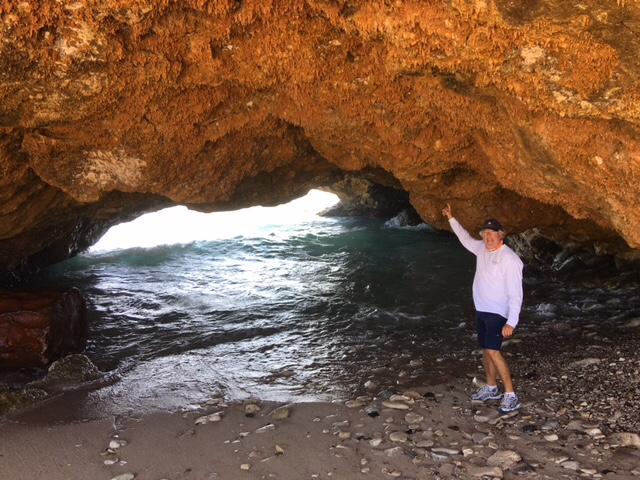 Typical natural Aruba landscape. Not super exciting as its dry & scrubby.
A definite departure from the lush tropics! 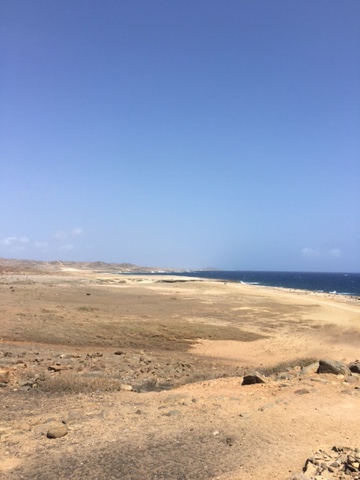 A rock garden along the way... where the tourists pile the rocks up. 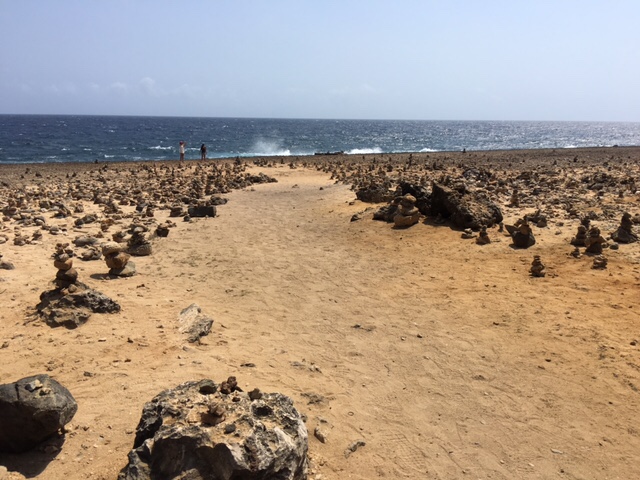 A stack of rocks is called a cairn. Cairns have been used to mark trails for thousands of years and are still in use today. Some religious traditions use them as parts of rituals or to mark spots for a person to stop and meditate. Archaeological evidence shows that some ancient Native American cultures used rock cairns to mark burial sites. 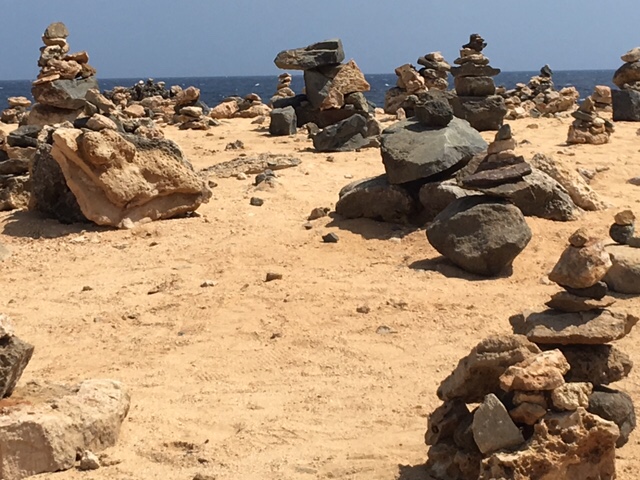 A little swimming hole for the locals where Brad & Jim took a dip. 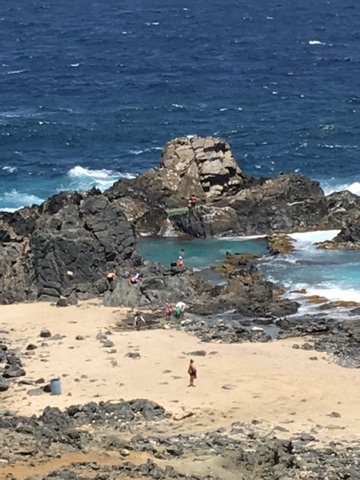 And the place where they rented the off-road vehicles from was also a mini zoo...who knew?! They spent some time speaking with the owner who is a HUGE animal lover. He has a few tour companies,  and all of the proceeds go to maintaining the zoo and rescuing animals.
This is all on his home property...impressive! 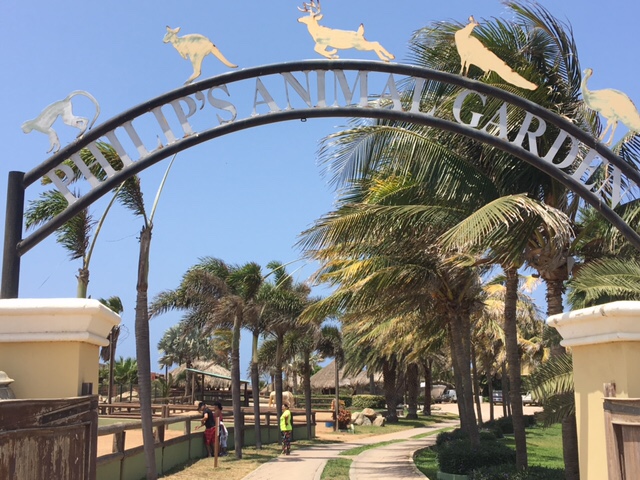 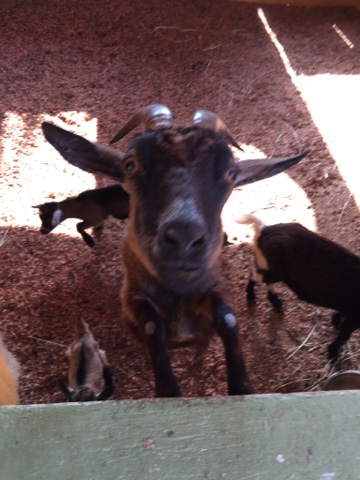 Brad got up close & personal... 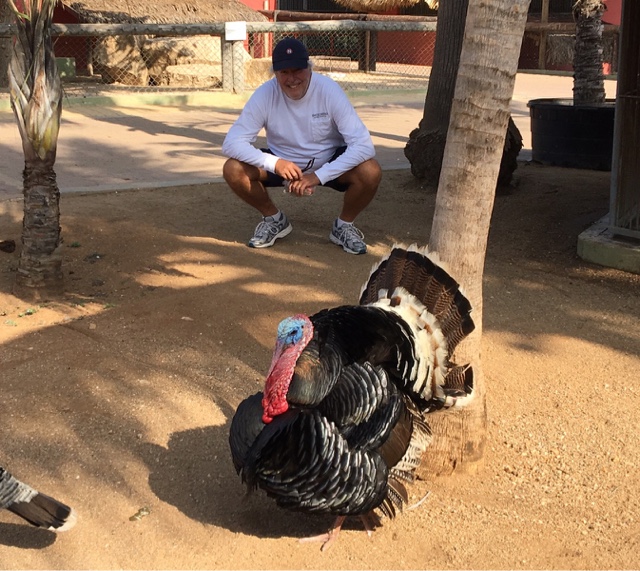 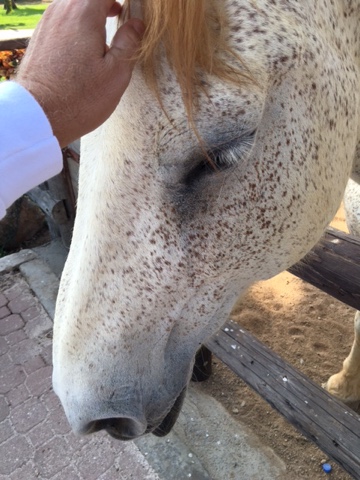 The proud peacocks were out in all their glory. 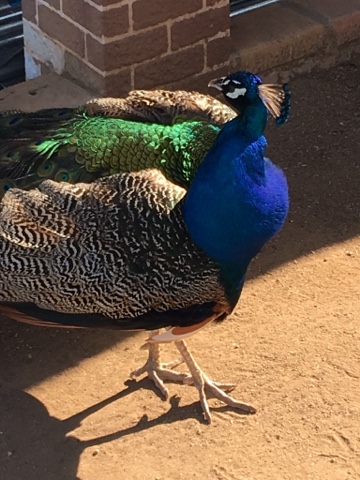 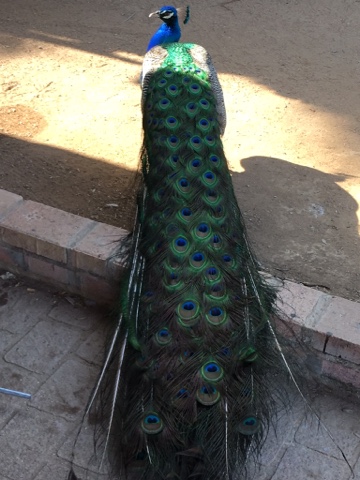 It was then time to prepare for their 3 day journey to the Panama Canal....stay tuned!
Posted by Unknown at 9:40 AM