We departed the next morning for Highborne Cay. 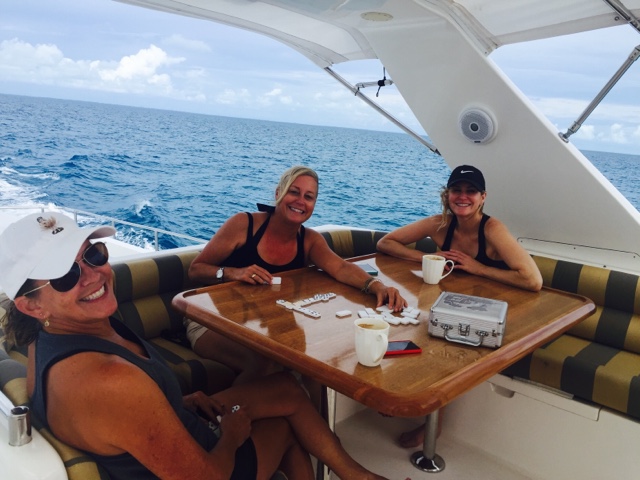 The girls busted out a game of dominoes & we cranked up the Reggae tunes,
just like the Bahamian natives.

Now you might be wondering what the "cay" in Highborne Cay means...so let's look at what Wikipedia has to say;
A cay (also spelled key; both pronounced alike as "key" how to say: /kiː/) is a small, low island consisting mostly of sand or coral and situated on top of a coral reef.
The English word cay comes from the Spanish word cayo and this from the Taíno word cayo meaning "small island".[1] The English words key and quay (which means wharf) come from the old French kai meaning "sand bank". Because it is a Taíno word, "cay" (and the other forms) are used mainly in the Caribbean, but the type of island is found in the tropical seas where there are coral reefs.
Sand cays are built on the edge of the coral reefs, opposite the direction from which the wind blows most of the time. Because of that, cays are often elongated. Tides and wind (and sometimes sea birds) deposit coral debris. Weather affects the formation of cays greatly; large tides would bring much more debris onto the cay and thus make it larger, while a hurricane destroys a cay.
Now you've had a full dissertation on a cay.
Who knew?!

Brad and Bish double checked the journey ahead of us,
making sure there were't going to be any coral heads in our way. 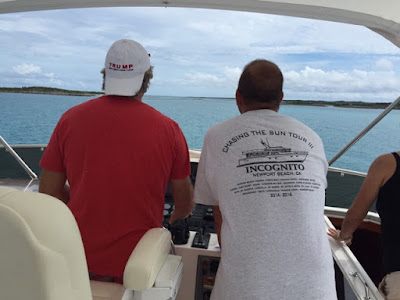 As Brad hangs out at the helm of the fly bridge as we are underway,  I can tell he's in deep thought contemplating our special voyage. 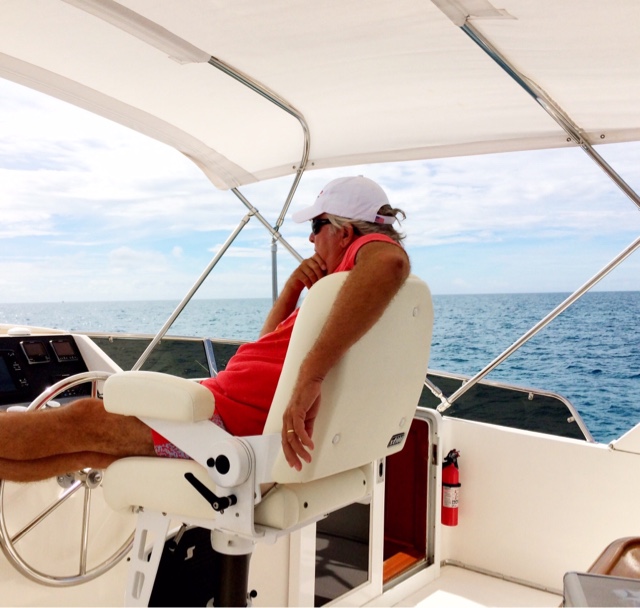 Soon we arrived at Allen Cay en route to Highborne, and dropped anchor. 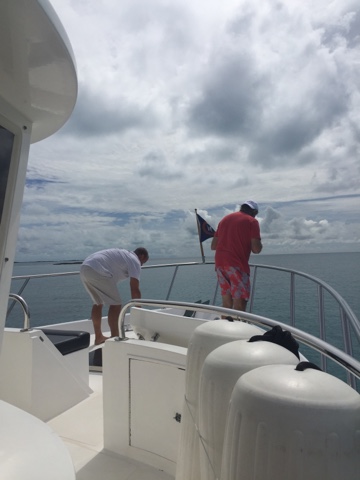 We got the dingy off and lowered it into the sea...ready for the iguana action. 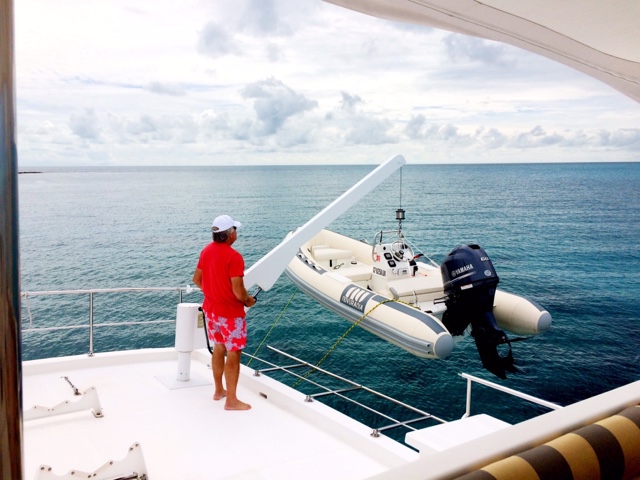 The girls and I anxiously awaited our afternoon adventure! 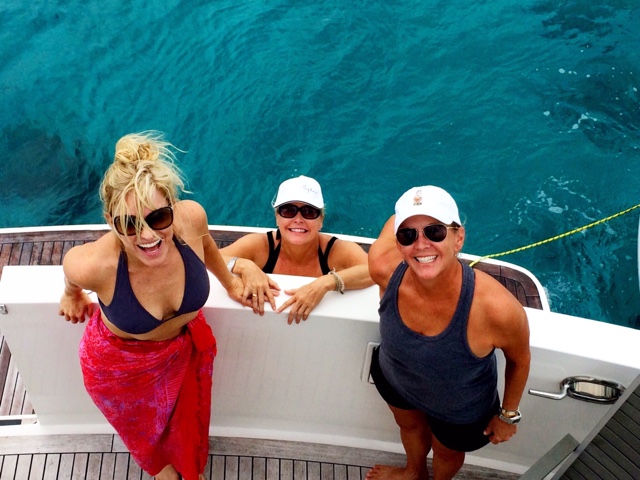 But first...Bish and a great lunch prepared for us! 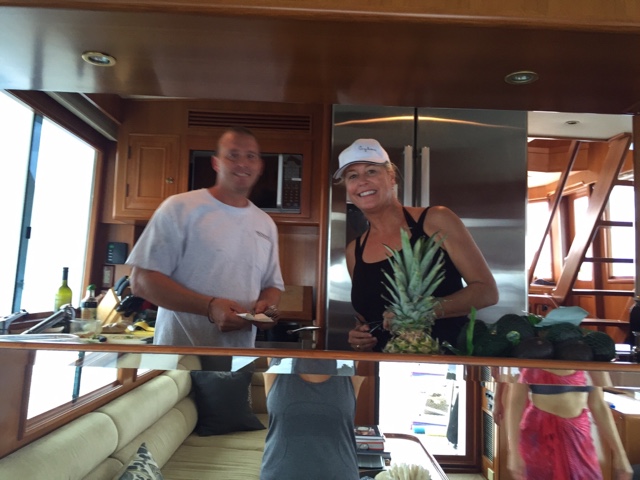 Afterwards, we were off to explore Big Majors Cay... 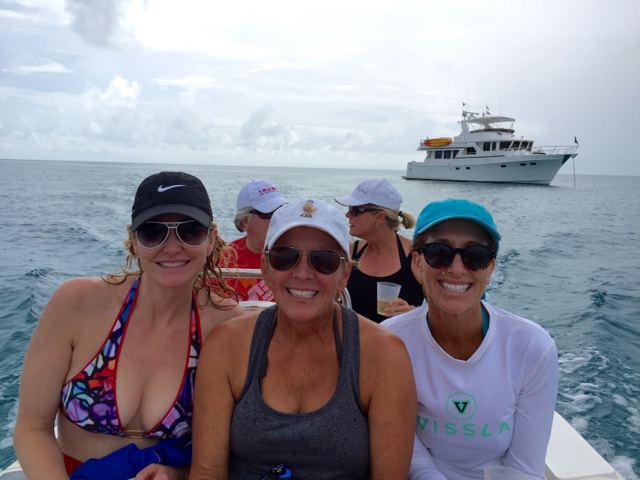 Wendy had her Go Pro out and was filming all of the action. 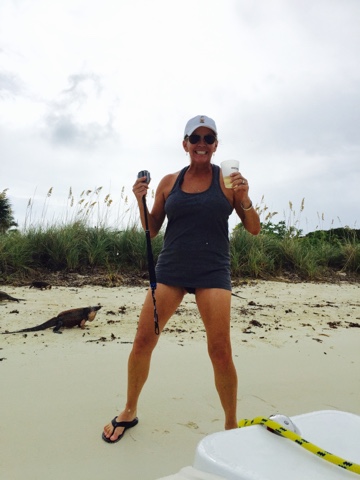 It was a small inlet that we pulled into to observe the indigenous Rock Iguanas...
Bish prepped some fruit and veggies for us to feed them. 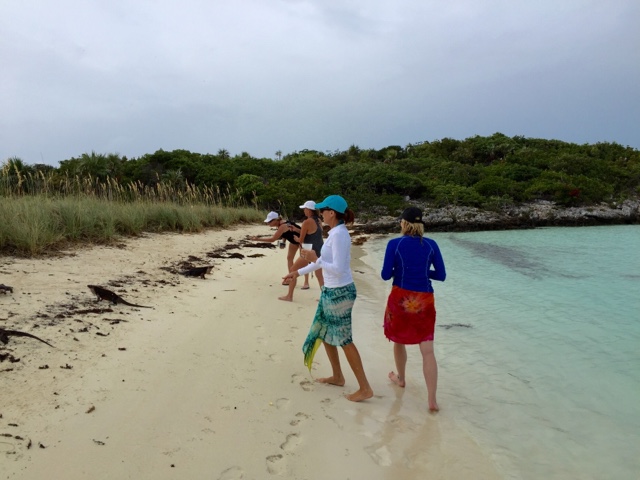 As soon as we arrived, the iguanas came out in droves. Impressive and so prehistoric looking. It turns out that these Bahamian Rock Iguanas are extremely endangered and there's only about 1500 left. 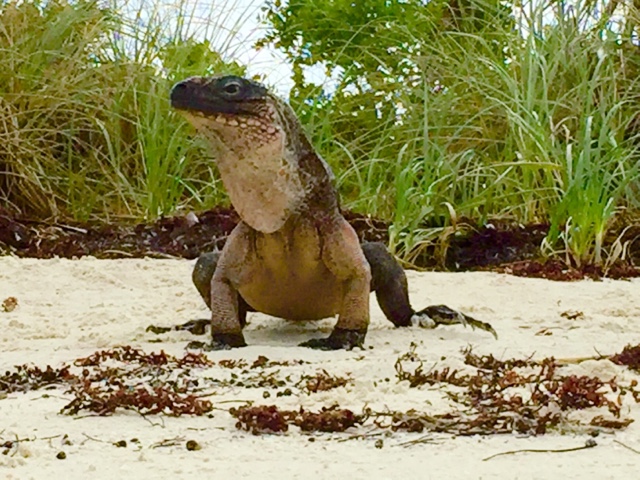 I had fun photographing them in their natural habitat. They were big suckers! These iguanas are kept on isolated islands so that they aren't endangered by pigs, cats or dogs. 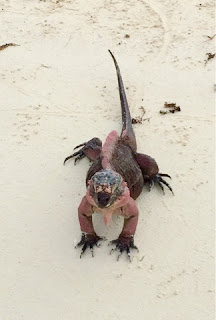 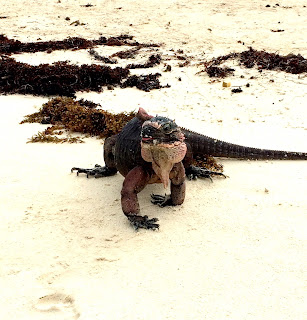 Then it was time for a swim. The sand was as soft and fine as velvet. The sea was like bath water and I could have kept swimming for the rest of the day at that sweet spot. 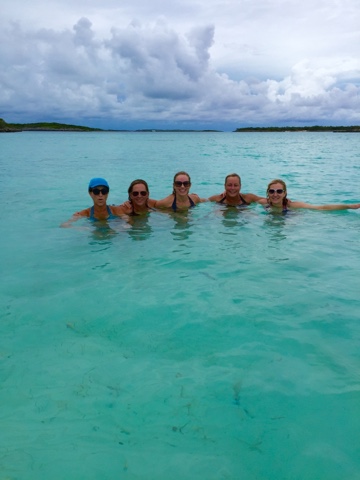 The girls and I loved every minute of it!! 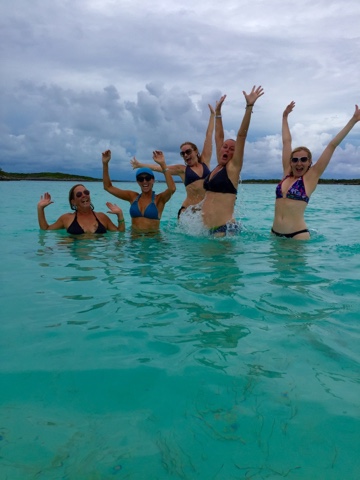 As we headed back to our boat, we spotted it from the next bay over.
What are those black clouds you ask? Just afternoon monsoons, that come & go.
No biggie at all and they are normally gone in 15 minutes. 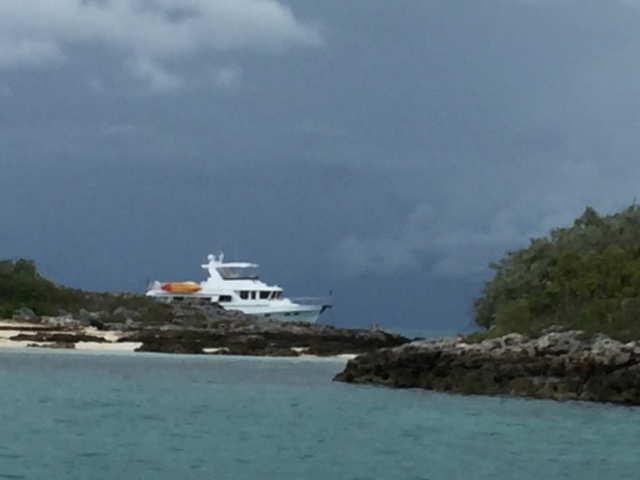 And then we arrived to Highborne a short time later... 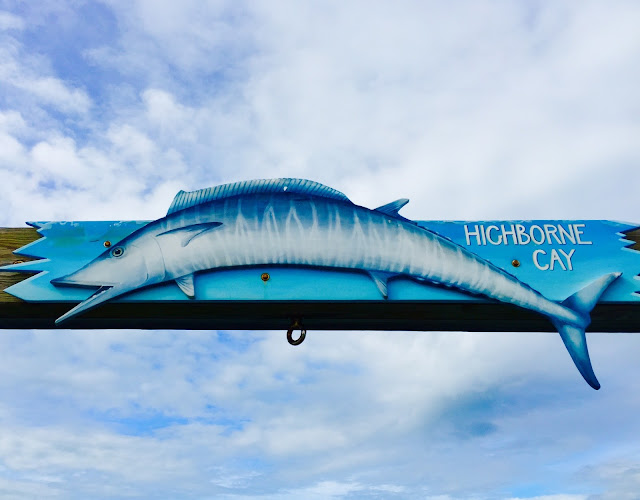 This place was serenely beautiful and the water was crystal clear.
You just couldn't stop drinking in the surreal beauty of this cay. 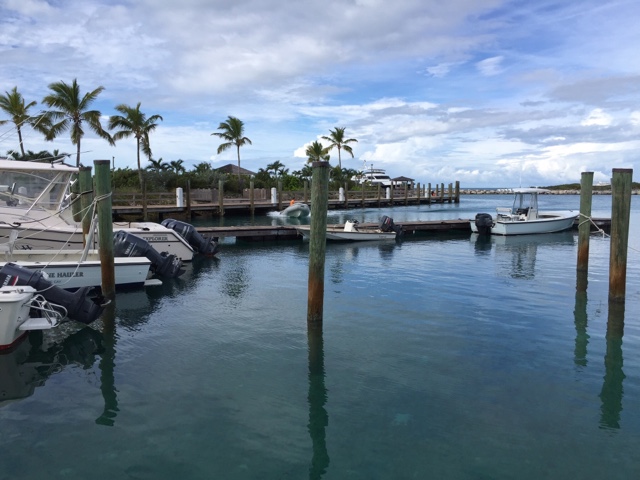 All tied up at the dock, Laura and the girls were ready for action. 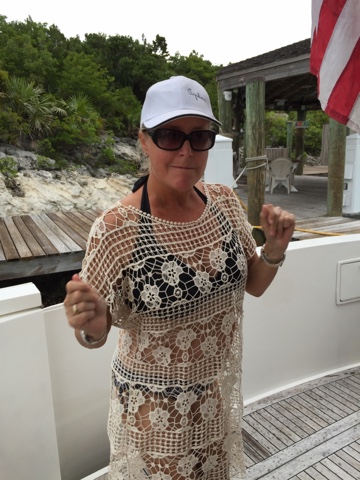 The girls and I set off to explore the small island on foot as soon as we docked.
The sights were gorgeous!! 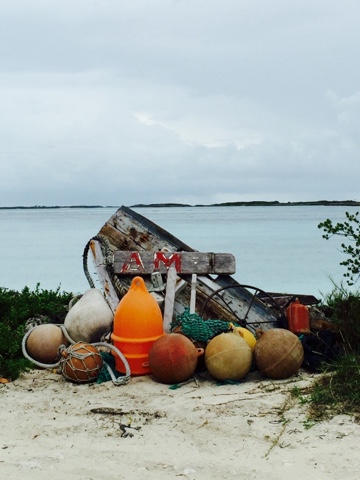 The nurse sharks were everywhere and hungry for a Scooby snack. 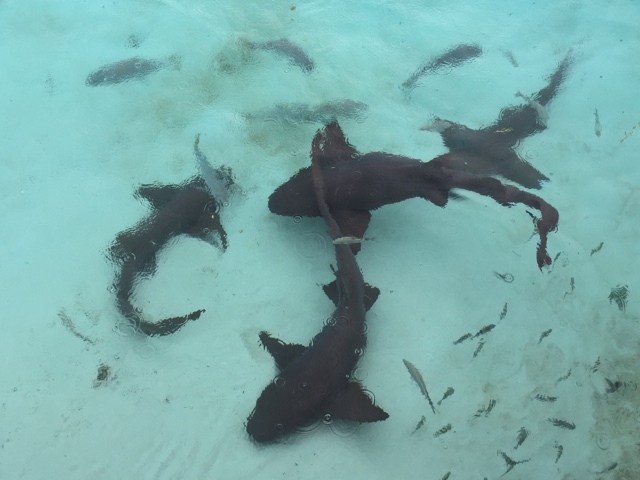 We all were mesmerized by these creatures of the deep. 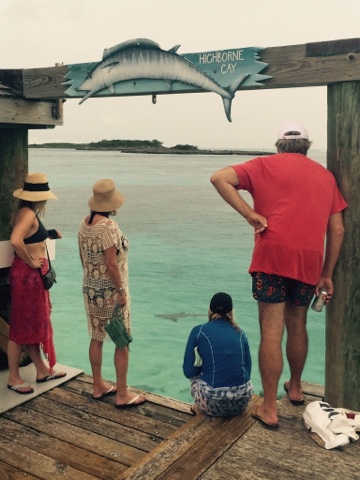 Brad & Laura soon found the beach an idyllic spot for a view. 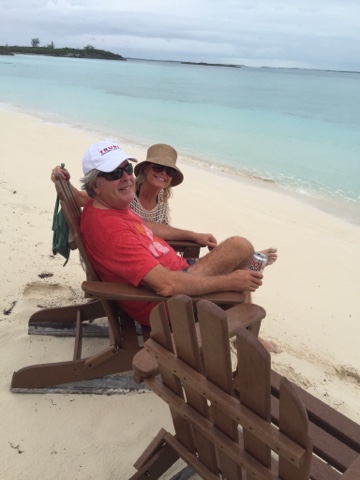 We all enjoyed our beach time and chatted long and hard over the stock market
and the BIG changes this year due to our shared investment group interests. 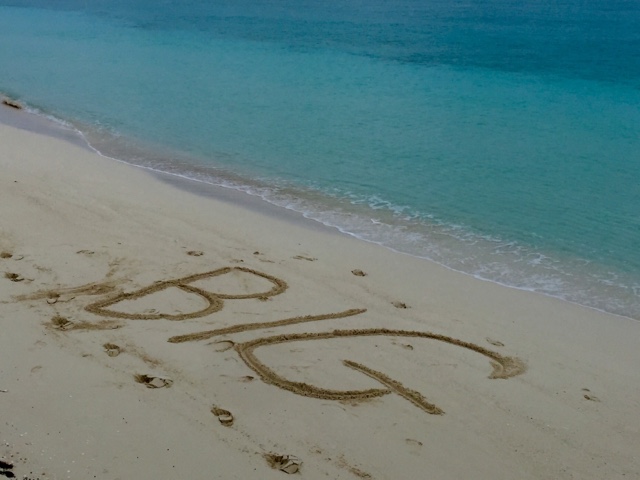 Then it was time to head back...
But first, a foot wash! 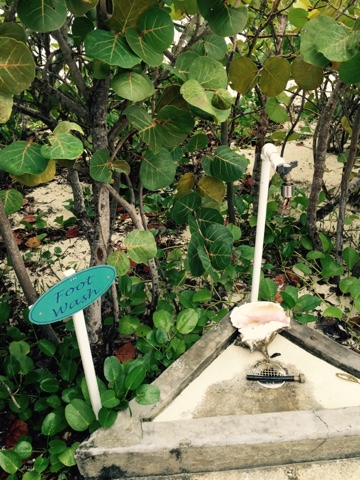 Wait. What's this? The perfect swimming bay?! Forget the foot wash.
Two seconds later we were in that water for hours. 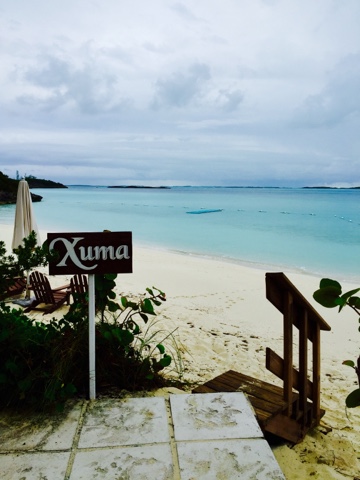 They even had a foam Lily Pad to offer a buffer zone for any nurse or reef sharks that might want to lurk around us. (okay, we all know that's not true) Ha! 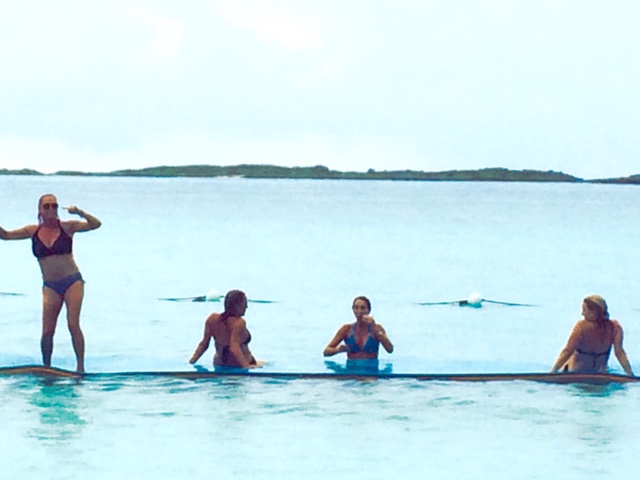 We felt like a bunch of kids on summer break. 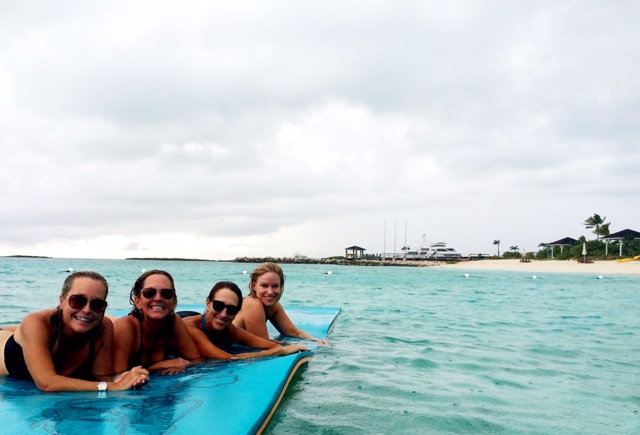 So much fun we had carousing in this bay... Rain showers and all! 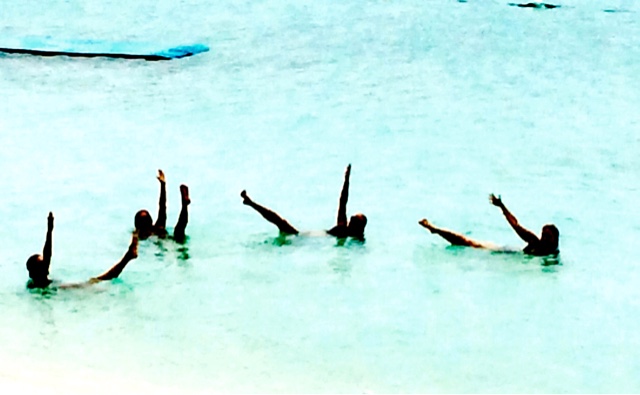