It's been approx 7500 miles since we departed Newport Beach on September 29th,
and we have arrived in the navy town of Norfolk. 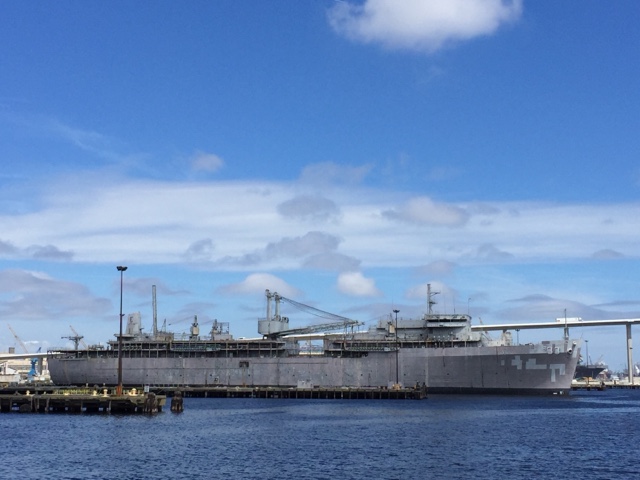 We are looking around for our welcome wagon..ha-ha!

At least it wasn't this guy...

Everywhere in the port of this city, is navy ship after ship. 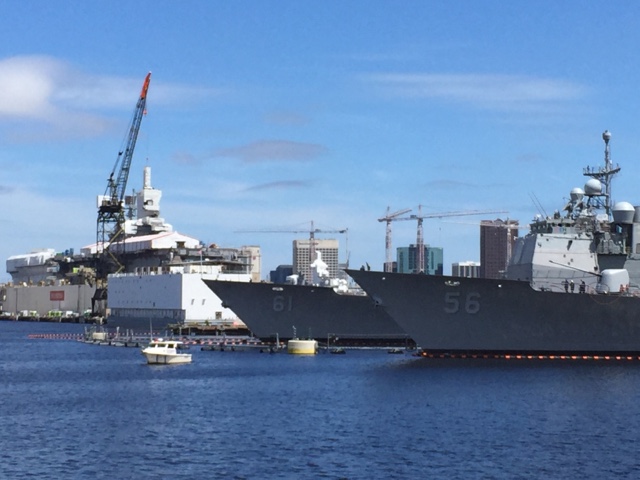 Can you see the small patrol boat in front of the big warships in the pic above? That's our national security keeping our waters safe and borders protected. Our national threat system was raised to a high alert while we were there and you could see their presence everywhere.

Norfolk is located at the core of the Hampton Roads metropolitan area, named for the large natural harbor of the same name located at the mouth of Chesapeake Bay. It is one of nine cities and seven counties that constitute the Hampton Roads metro area, officially known as the Virginia Beach-Norfolk-Newport News, VA-NC MSA. The city is bordered to the west by the Elizabeth River and to the north by the Chesapeake Bay. It also shares land borders with the independent cities of Chesapeake to its south and Virginia Beach to its east. One of the oldest of the cities in Hampton Roads, Norfolk is considered to be the historic, urban, financial, and cultural center of the region.
The city has a long history as a strategic military and transportation point. The largest Navy base in the world (toured it!), Naval Station Norfolk, is located in Norfolk along with one of NATO's two Strategic Command headquarters. (No spying going on here at all... *wink wink) The city also has the corporate headquarters of Norfolk Southern Railway, one of North America's principal Class I railroads, and Maersk Line, Limited, who manages the world's largest fleet of US-flag vessels. As the city is bordered by multiple bodies of water, Norfolk has many miles of riverfront and bayfront property, including beaches on the Chesapeake Bay. It is linked to its neighbors by an extensive network of Interstate highways, bridges, tunnels, and three bridge-tunnel complexes—the only bridge-tunnels in the United States. How do you stand this kind of excitement?! 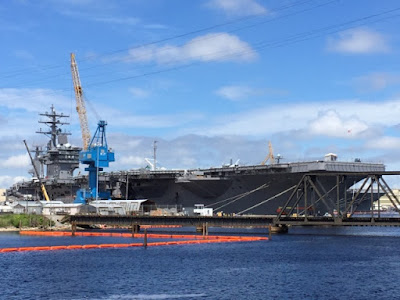 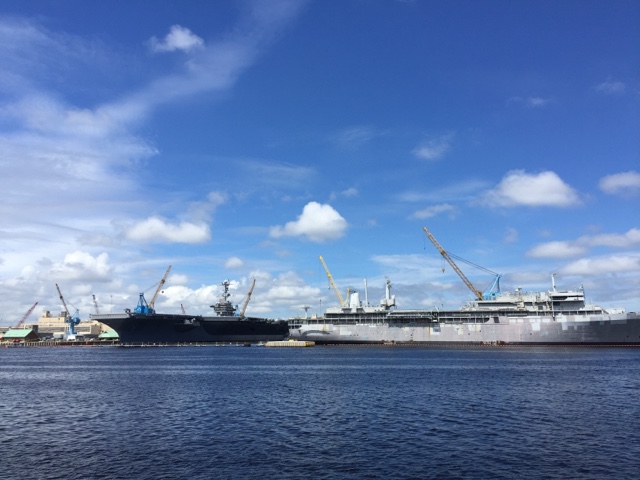 Brad told me to put away my camera or we may have the company of some unwanted visitors.
So.. I snapped some shots on the sly. Ha! 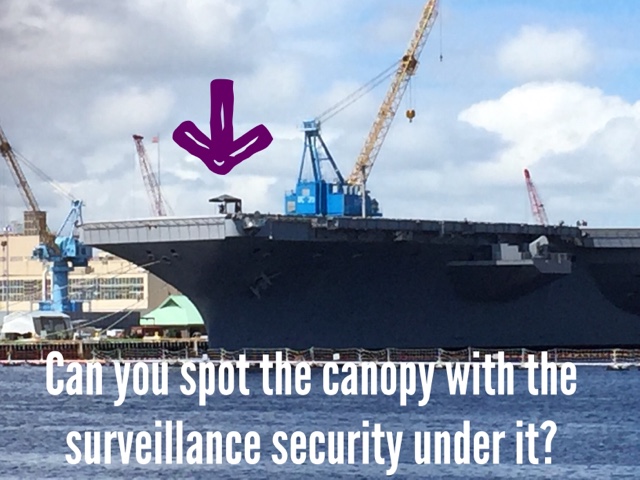 Every single ship in this harbor was massive. 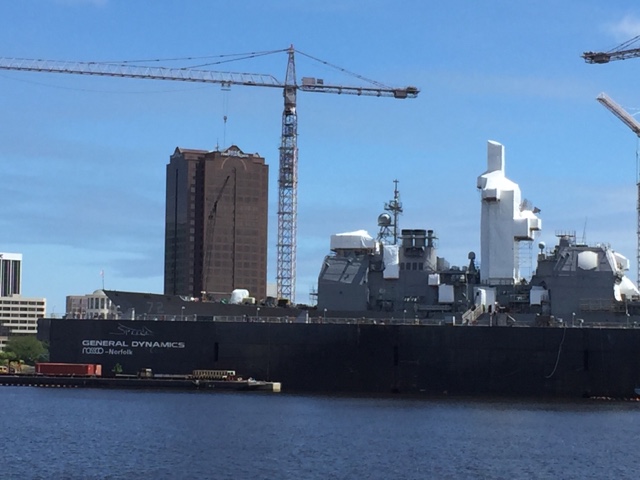 The waterfront view in Norfolk,VA 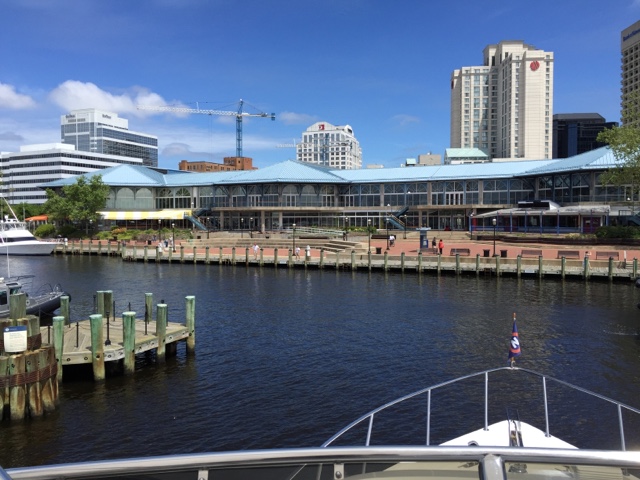 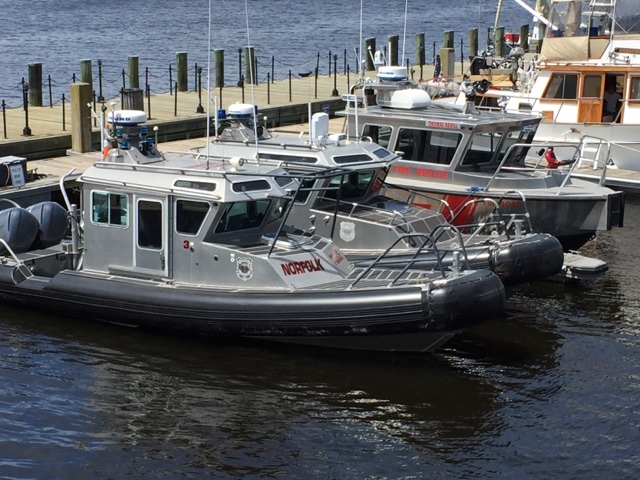 Pulling into our slip was a piece o' cake. 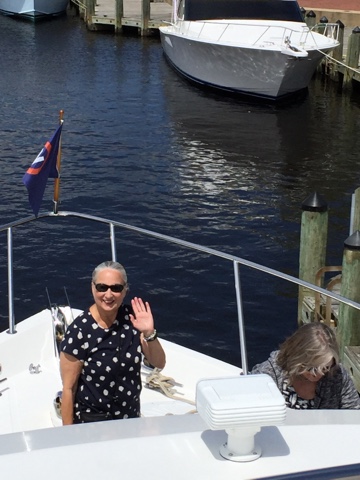 And an afternoon tour of a navy base. It was beyond stimulating! 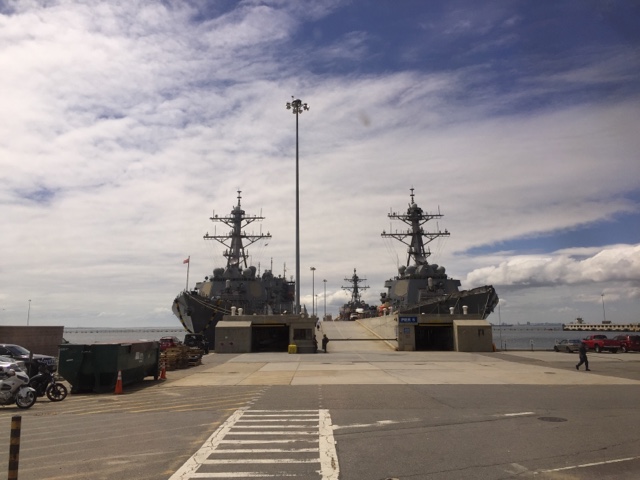 I slept through it. Ha-ha!! 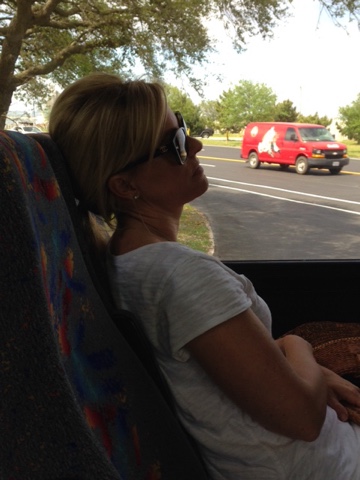 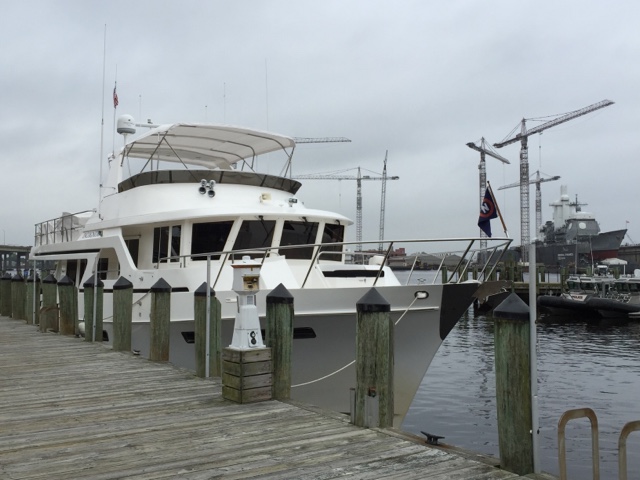 Back to the boat we went, enjoyed a fabulous dinner with Bish and bid adieu the next morning to Connie, Linda and Sam as they headed home and we headed north cruising to Annapolis.