I awoke the next morning to learn that I missed seeing Barry Diller
& Diane von Furstenberg sailing by on their impressive Perini Navi
sailing yacht...one of my faves.
That ship is such a looker! 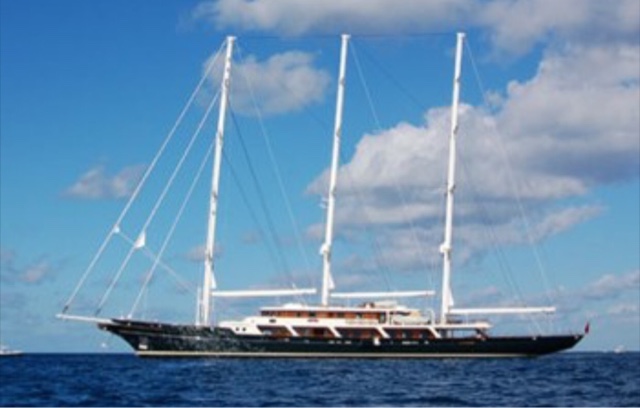 I also missed Steve Job's yacht cruising by with his widow Allison aboard...
Quite a wonder of naval architecture! 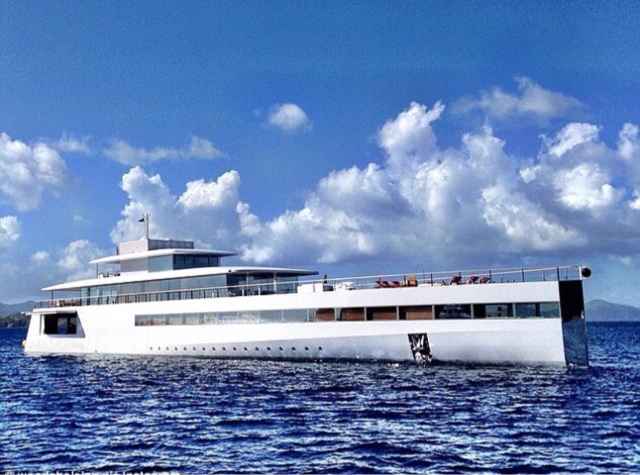 All of this went down about 6am.
They must have left their anchorages early to get a spot somewhere special...

And what do I get when I woke up to grab my coffee? I took a look at our anchorage and
spot our "neighbor" out there on the back of his boat, naked as can be and washing his willy! 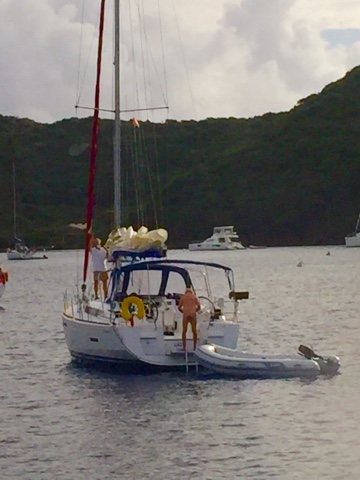 Too damn funny. We departed our anchorage and headed to Peter Island. 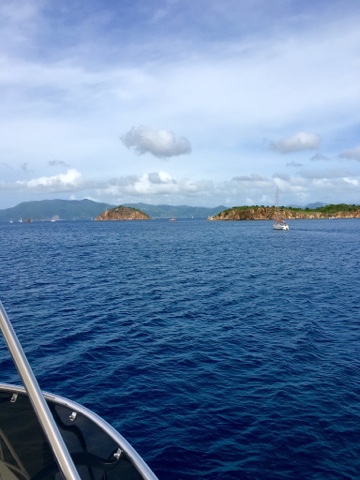 Peter Island is a 1,779 acre private island located in the British Virgin Islands (BVI). It is about 5.2 miles south-west from Road Town, Tortola. The island was named after Pieter Adriensen (nicknamed "The Commander") who was the brother of Abraham Adriensen, Patron of Tortola under the Dutch West India Company in the early 17th century. Pieter Adriensen and Joost van Dyk built a fort and SLAVE PENS.
DOUBLE GASP!

at Great Harbour on Peter Island to facilitate privateering and the nascent trade in slaves from Angola.
In 1978, an avid sailor, who just happened to be a partner in the Amway Corporation, purchased Peter Island after sailing past it several years before. There, he established the resort that exists today and lived on the island to maintain the resort.
Peter Island is the largest private island in the BVI and the fifth largest of the 60 islands, quays, and exposed reefs that comprise the BVI. It was owned by the Amway Corporation from 1978 until 2001 when full ownership was transferred to the Van Andel family, co-owners of Amway.
The island is predominately undeveloped but contains hiking and biking trails on which to discover the tropical flora and fauna indigenous to Peter Island. The beaches face the Atlantic Ocean, the Caribbean Sea, and the Sir Francis Drake Channel. Two of the beaches (Honeymoon and White bay) are for use by guests only. The island's biggest beach is Deadman's Bay, a mile-long crescent beach shaded by palm trees with a section open to visitors. Deadman's Bay is said to be named for pirates that were marooned on neighboring Deadman Chest island.

The 15 men tried to mutiny and their pirate boss left them on the island with one bottle of rum. ("15 men on a deadman chest..yo ho ho and a bottle of rum" is how the song goes.) They subsequently drowned swimming to Peter Island, their bodies washed up on shore.
You can really feel how special this place is! It's the only hotel, the 52-room Peter Island Resort, ranked in Conde Nast Traveler’s “Gold List,” and the Travel and Leisure “T+L 500”, is only accessible by boat or helicopter. It has since twice been named by Conde Nast Traveler as one of the "Best Places to Stay in the World.
Peter Island - Deadmans Bay 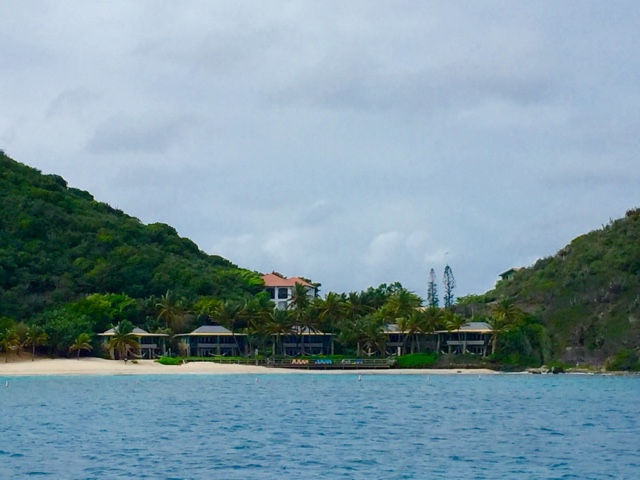 Even a gorgeous grass tennis court to boot! 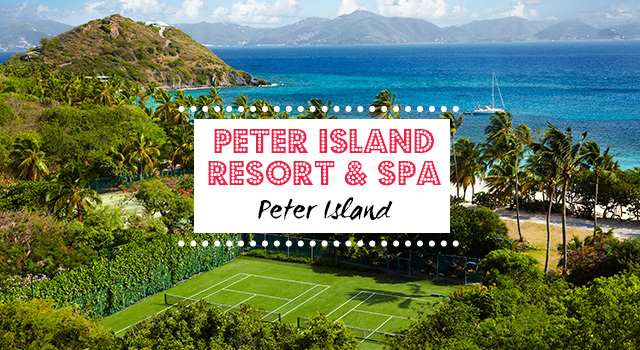 We all hopped in the dingy as fast as we could to head
to lunch and explore what this island had to offer. 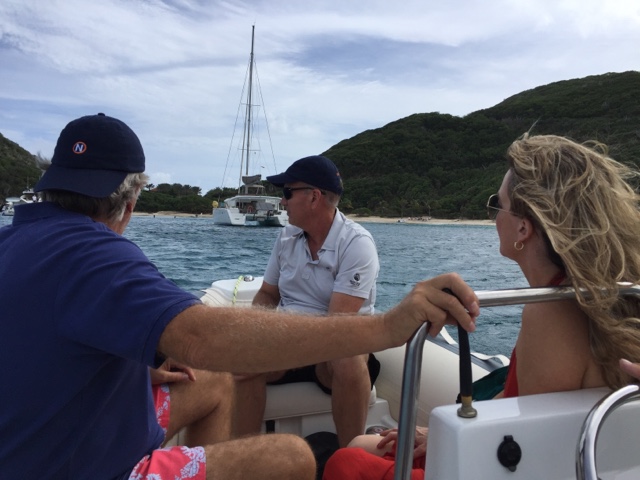 I was SUPER excited for the Peter Island experience.

Therefore, time to bust a move... 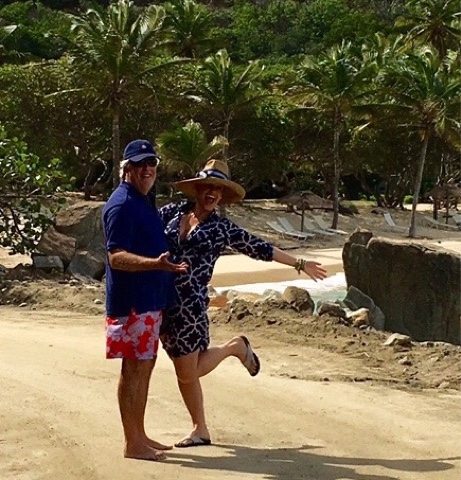 We sat down for lunch and they had a fantastic steel drum band playing... 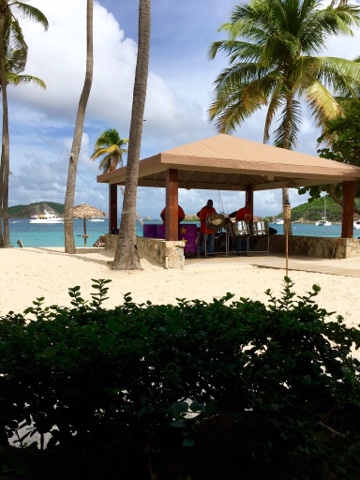 Our view definitely didn't suck, and we had INCOGNITO in full view. 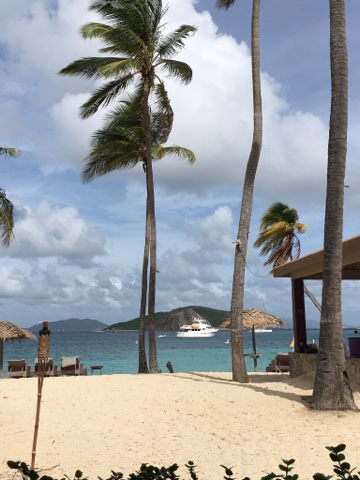 Here is Brad with Jean Kelly. She was our server and SUCH a doll. We could kid around with her all day and she took great care of us. Every employee we came in contact with here was super sweet,
but Jean was in a league of her own. She even offered up her homemade cookies after lunch.
Who does that?! 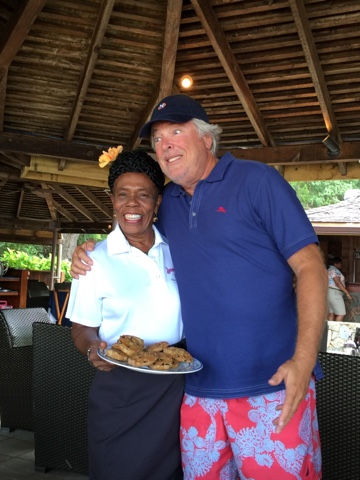 She had her own shirt with her likeness on the back...the only employee to do so.
I think she's worked there for the last 30 years. What a special soul. 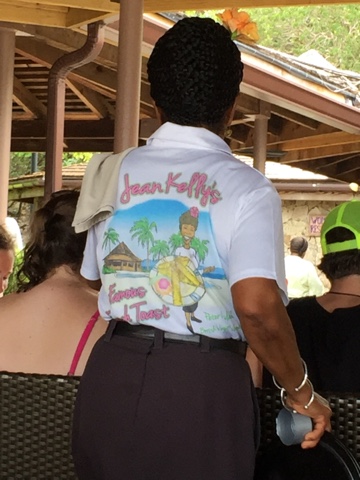 After lunch, we went for a walk to explore and found their small marina where Brad & I would be spending New Years at for a few days. Can't even wait to come back!! 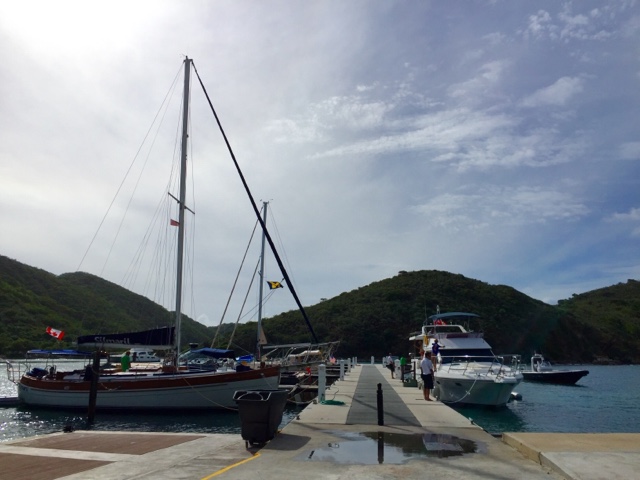 Kim, Brad & myself of course had to bust a move for Mark, our worldly shutterbug. 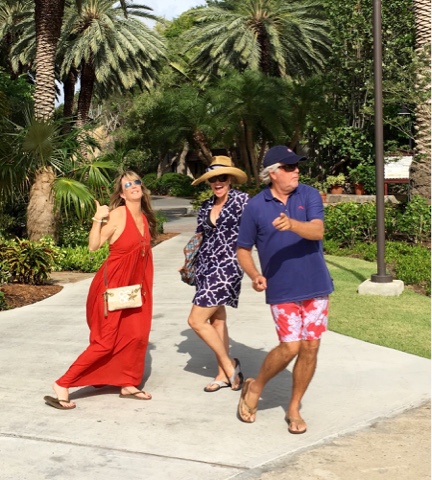 We left the magical marina area and headed back to the beach. 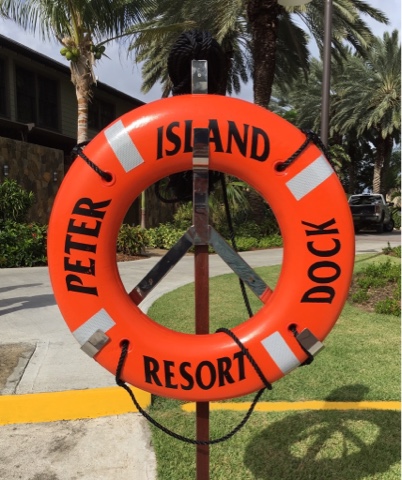 Brad was the first one in the water.. 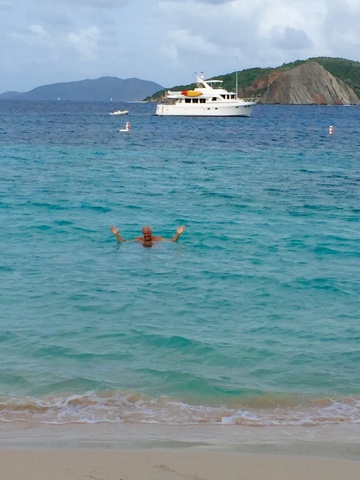 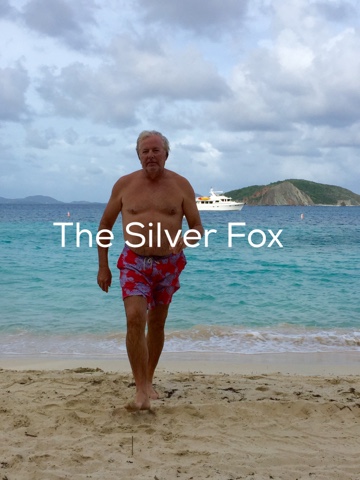 Mark & Kim kept dry and had the best time enjoying the beach. They look adorable!! 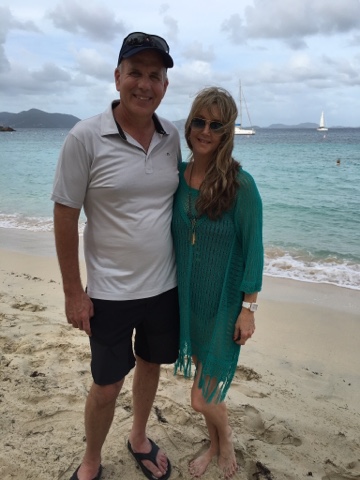 I found the sand to be as soft as velvet and drank in the view from a lounger.
It's surreal to see our boat anchored across from us...so far from home. 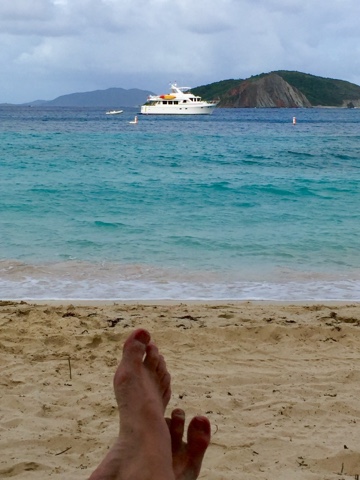 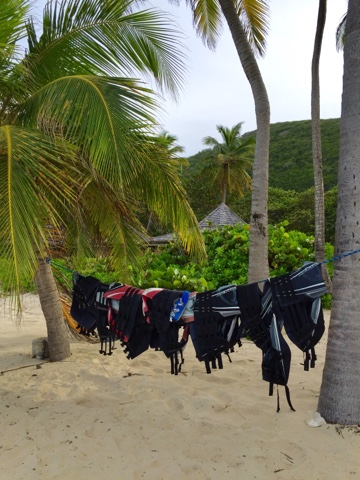 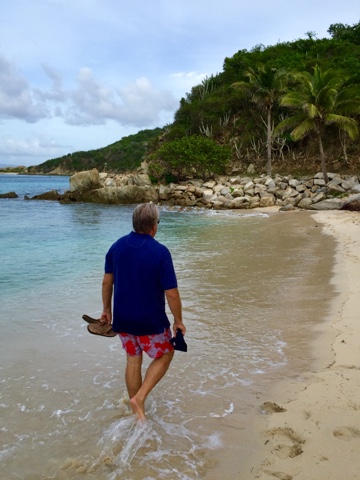 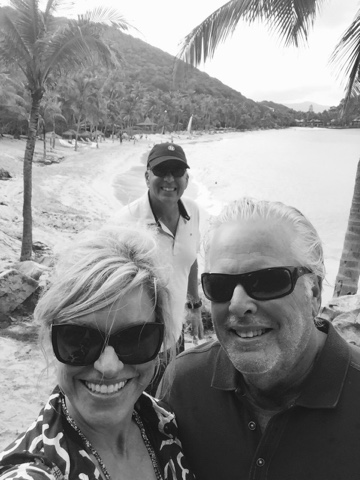 Kim is fresh off her jungle modeling shoot. 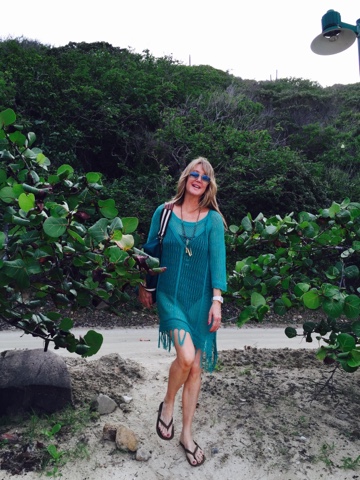 She worked her moves...

And Bish came to whisk us back to the boat. 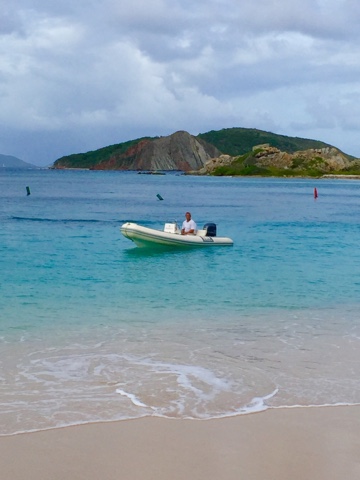 While Bish had appetizer preparations underway, I had to show you how BIG the local island avocados are. We bought this one at the farmers market in Tortola..it was delish!! 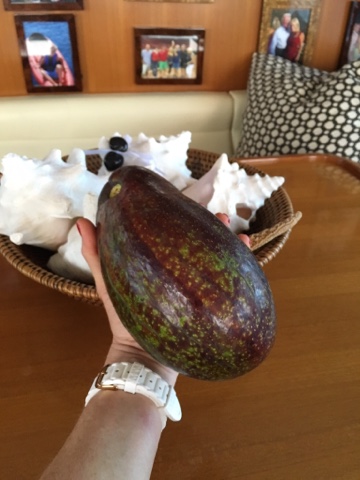 Mark & Kim using their own binoculars to scope out our boat neighbors...they came in handy! 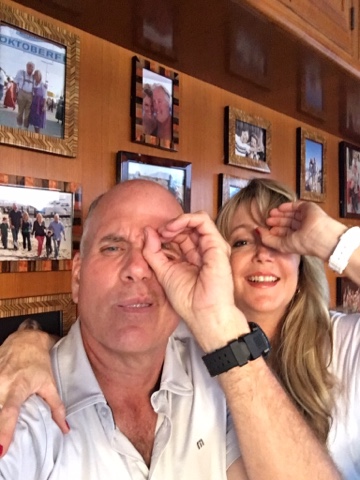 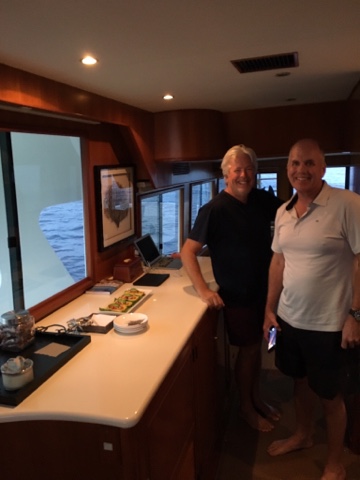 Those two are each others yin & yang...Just like JT & Jimmy.