We departed the dock at 6:00pm to catch the 6:15 Flagler Bridge opening right next to the marina. We had a 19 hour cruise south to Nassau and this was the perfect time to leave in order to arrive the next afternoon before dark.
We were so psyched to get the Caribbean portion of our 20,000 mile crazy adventure underway!
Brad could hardly stand the excitement. And now...a word from our sponsor.

You never want to arrive into a strange marina at night...especially a foreign one. Too many obstacles and things that could go wrong. This is the last bridge crossing we will have until we arrive home in Newport the middle of next year. 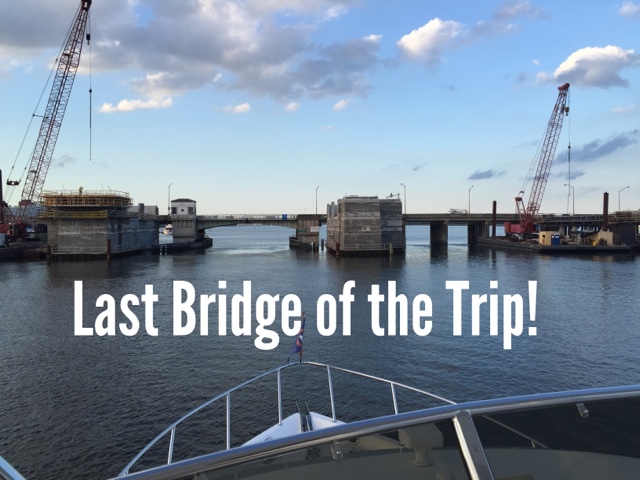 We radioed ahead and requested an opening and once granted, the bridge couldn't open and became stuck. All we could do was wait. Ruh ro! 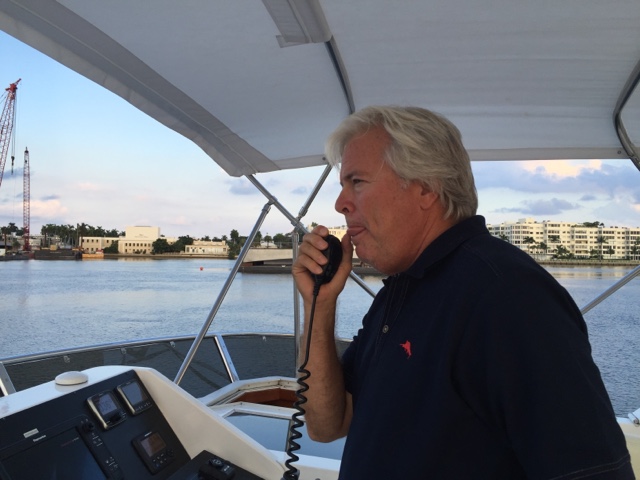 Our only other choice was to head south down the intracoastal to Boca baby....and that meant we wouldn't hit the open ocean until 9pm. So...we opted to roll the dice and wait out the Flagler Bridge while they called for an engineer. At least the beginning of our Caribbean adventure had some excitement already!
Finally, an engineer came out and got the bridge working after an hour and a half. (Which was actually quite quick in my opinion) They hailed us on the radio to let us know we could cue up and move ahead. Woohooo! 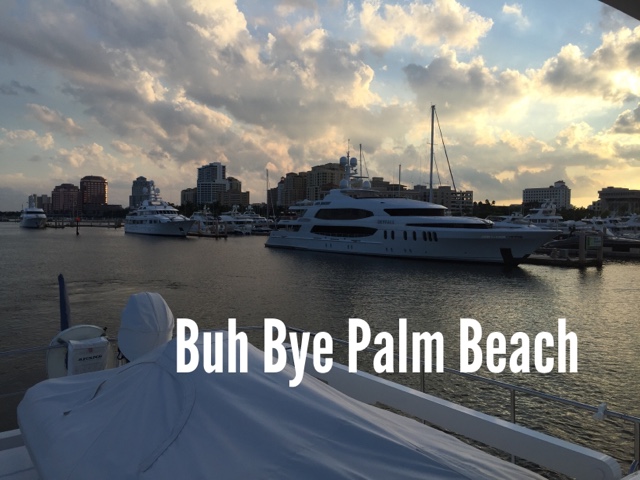 Instead of leaving from the marina at dusk as planned, we departed under the cloak of darkness for about 6 miles as we dodged random little fishing boats, lots and lots of buoys and a random manatee or two.
A few hours later we crossed the Gulfstream which slowed us down a few knots. The Gulfstream is best described as an underwater river that runs beneath the ocean extremely rapaciously and stretches from the Gulf of Mexico...all the way up the eastern seaboard. I think of it like the jet stream, but with water. It really ramps up in the month of November (cue rough waters!) and luckily we are ahead of it! (Brad is always ahead of the game for that matter.)

And then, there we were...crossing the BERMUDA TRIANGLE! 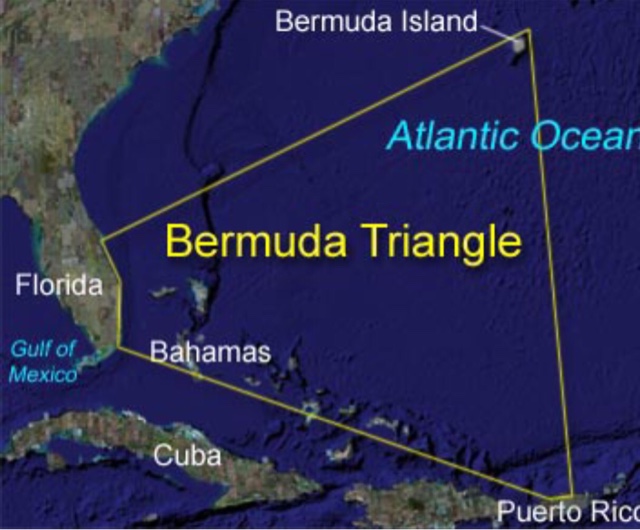 Holy crapamolé is right! I said a prayer and didn't poop my pants luckily.

The Bermuda Triangle is loosely referred to as the Devil's Triangle. It's here where numerous ships and planes have disappeared without explanation. Goodtimes! The only "oddity" of our night crossing was when Bish came upstairs to ask us why we kept calling him on the boat phone in his room. Well, we weren't. He said it rang 4 times and no one was there. So that's one mystery of the Bermuda Triangle that will never be solved. Somehow we will cope and get through this. Maybe it's due to climate change.  Ha! We can ask Bernie about that one...

Brad and I ended up doing "watch" together from 9pm-3am. We ran the boat at night from the flybridge as it was such gorgeous weather. Warm and balmy with a nice breeze. We crusied past a ton of cargo ships and freighters, and passed the time playing "heads up" on my iPhone. 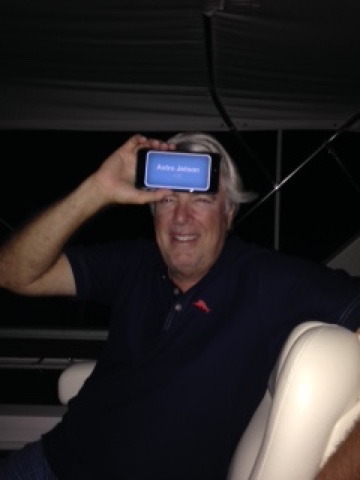 It's a hilarious trivia game and an "app" you can download if you're with one other person or in a group. You hold your phone up to your forehead while the other person gives you clues so you can guess the answer. It certainly kept us awake with hours of laughter...In between watching the radar and filling out the cruising log that is. We also watched the night sky as it was blanketed by a million stars. I even saw a few shooting across our path. Just idyllic!

We arrived to Nassau the next day around 12:30pm. The seas cooperated and had been flat as can be luckily. 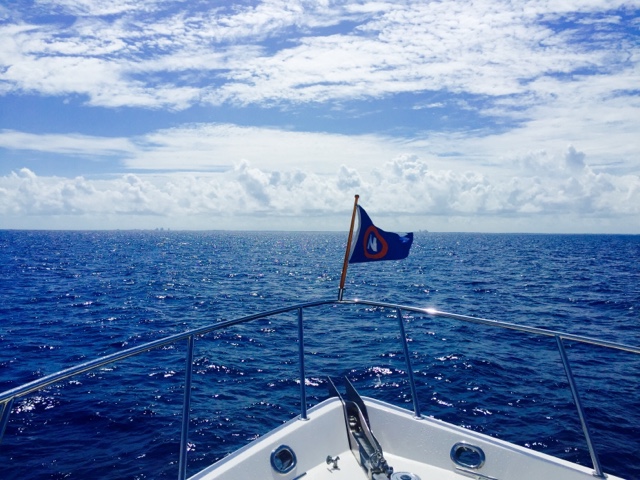 We were greeted at the harbor entrance with a quintessential lighthouse and our first glimpse of the turquoise waters that we're sure to be a familiar sight for the next six months. 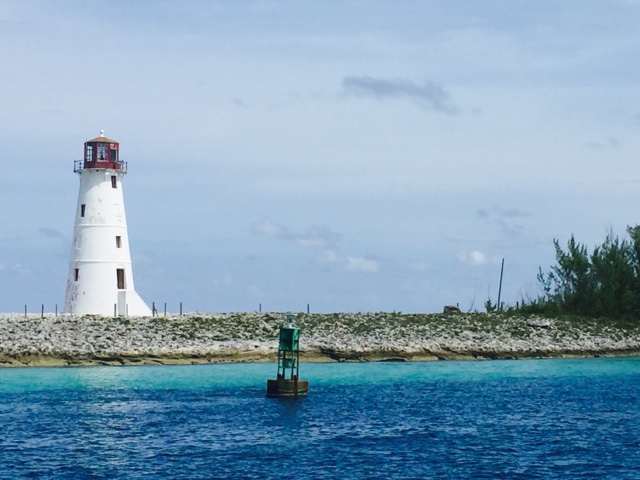 We pulled into the harbor and there were only two cruise ships in port which is allegedly minimal on the scale of what they normally have there. 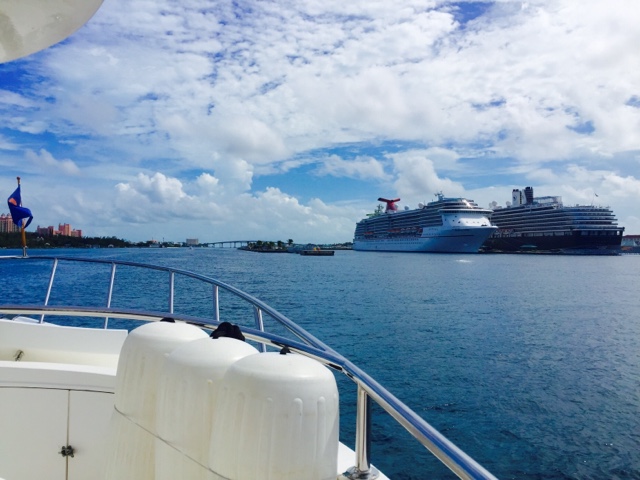 Bish prepared our lines and got the fenders ready as we were going to be docking at a standing dock. 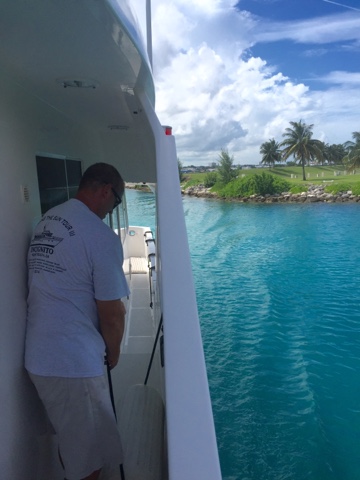 As we approached the Atlantis resorts marina, it was apparent why the name was so apropos.
Atlantis was a behemoth of a resort! 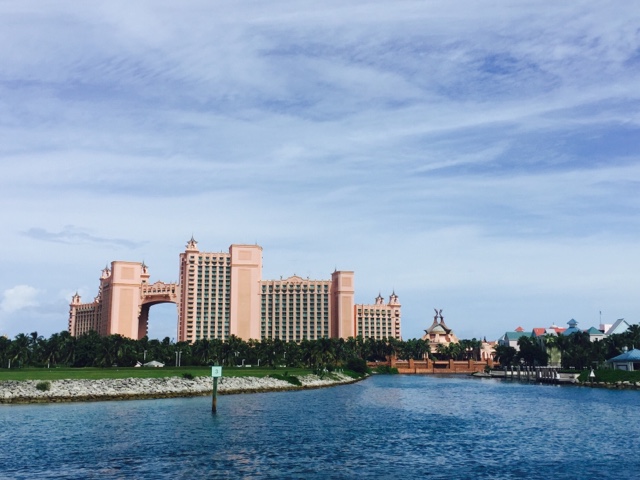 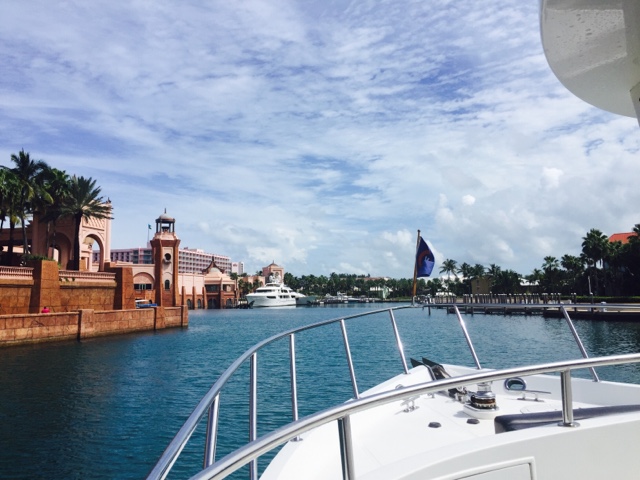 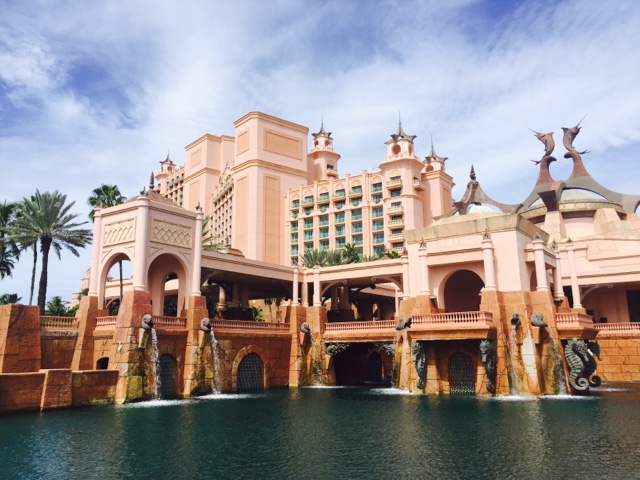 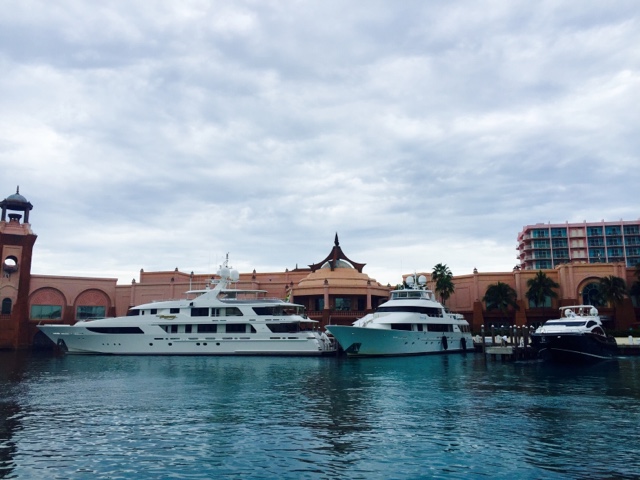 Here we are pulling into our dock.
What a view and all of those sherbet colored houses are going to be a great backdrop! 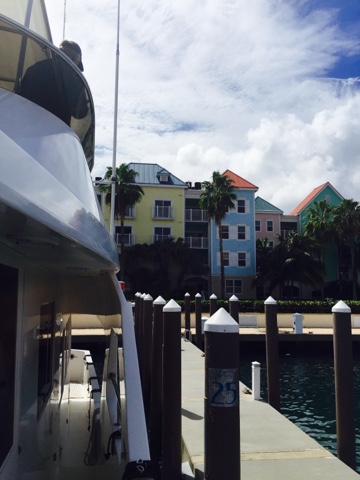 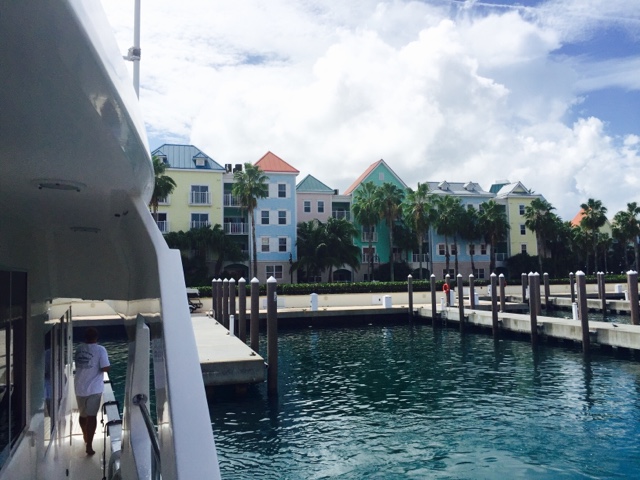 Bish checked us in at the dockmasters office, which as marina offices go was pretty sweet digs. 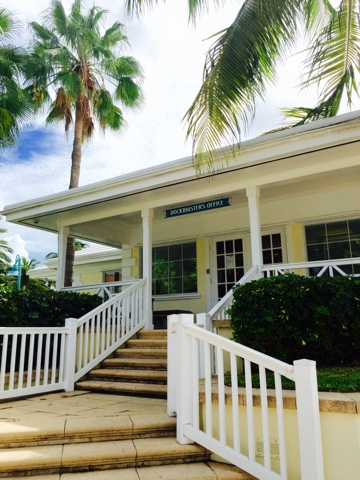 Soon the customs officials came aboard to clear us into the country. That involved some paperwork and passports. Then it was time for lunch...Off to the village we went. 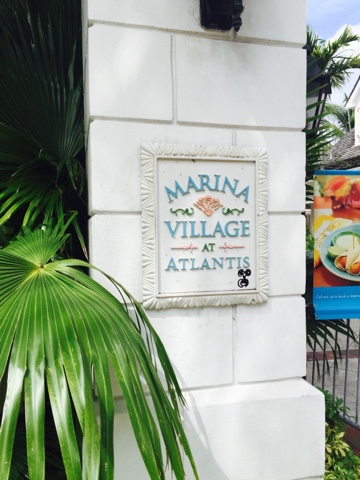 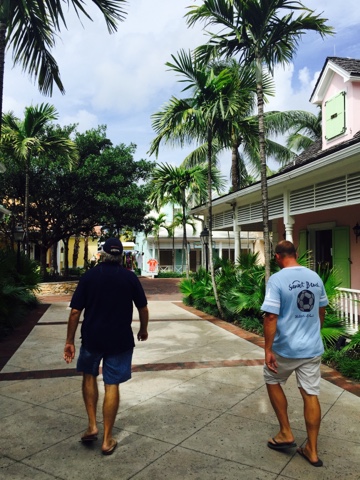 and a much needed nap after that. Having fun is hard work. Haha!
We checked out their massive aquarium at night and it was quite well done. 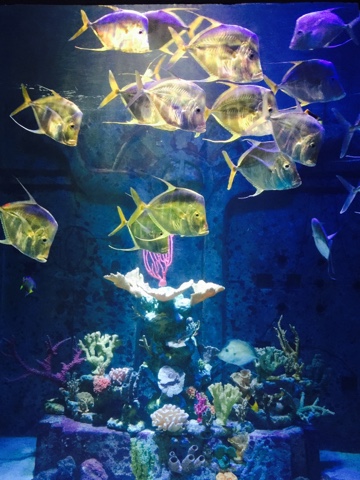 The eels were a bit creepy however. 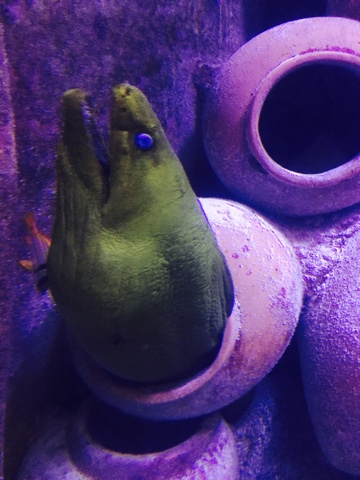 Email ThisBlogThis!Share to TwitterShare to FacebookShare to Pinterest
Where we're at: Caribbean (null)