We departed NYC around noon and headed out on the deep blue sea... 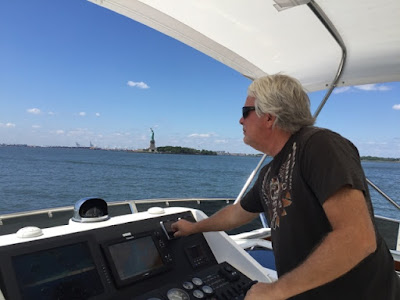 We will be underway for the next 24 hours en route to Norfolk where we would dock the boat for the next two weeks until we take it down to Palm Beach & cue it up for the Caribbean portion of our grand adventure starting this fall.

I was so sad that our east coast sojourn was over.

We had the BEST BEST time!! Cruising the east coast (especially the north) is just what a boater hopes for. We had great seas, wonderful weather and even fuel prices were down. And..no one had an accident on our watch.

My turn at the wheel as captain on the night shift that evening lasted 6 1/2 hours. I only needed to do a three hour window from 9pm-12am, but always try to go longer when I can and let Brad get his Zzzzz.
Meanwhile...I eagle-eyed our radar like an abuela watches Univision!

I was glued to it around the Delaware sound as it was an incredibly busy shipping channel. Proud that I could traverse this under the cloak of darkness all by myself. Brad taught me well!!

My only excitement that night was cruising past a huge fishing trawler and a handful of 800' oil tankers & container ships. I got out our trusty stabilizing binoculars (you need these as a boater!) to check out the trawler and it looked like they already had vats of fish filled up onboard. Massive nets were cast all around them too. Their flood lights were blinding. I steered clear and out of their way. The photo doesn't remotely do it any justice, but you can get the idea. 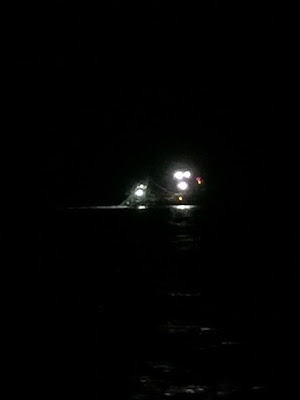 Here's command central in the pilot house. The radar screen on the far left is set to 3 nautical miles out, and the one dead center is set at 6 nautical miles out. I use them both when underway and they both offer their own brand of insight. The screen on the far right is our close circuit cameras that revolve around the boat and especially cover the engine room. Muy importante! 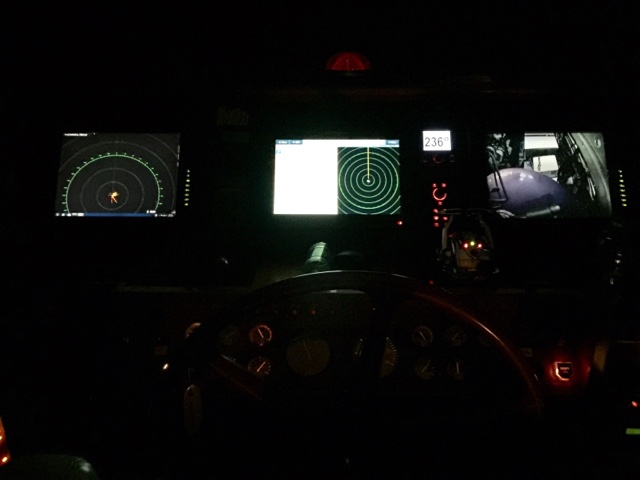 Once we entered the mouth of The Chesapeake the next day, it took us 2 1/2 hours inside the harbor to get to our marina. A long way in!
Norfolk is located at the core of the Hampton Roadsmetropolitan area, named for the large natural harbor of the same name located at the mouth of Chesapeake Bay. It is one of nine cities and seven counties that constitute the Hampton Roads metro area, officially known as the Virginia Beach-Norfolk-Newport News, VA-NC MSA. The city is bordered to the west by the Elizabeth River and to the north by the Chesapeake Bay. It also shares land borders with the independent cities of Chesapeake to its south and Virginia Beach to its east. One of the oldest of the cities in Hampton Roads, Norfolk is considered to be the historic, urban, financial, and cultural center of the region. 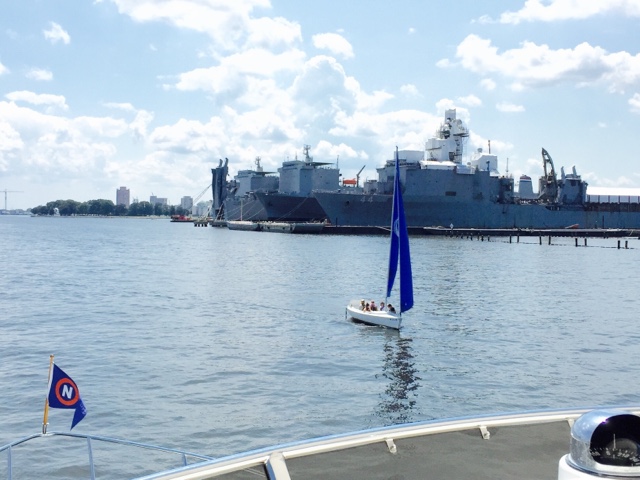 The city has a long history as a strategic military and transportation point. The largest Navy base in the WORLD, Naval Station Norfolk, is located in Norfolk along with one of NATO's two Strategic Command headquarters. The city also has the corporate headquarters of Norfolk Southern Railway, one of North America's principal Class I railroads, and Maersk Line, Limited, who manages the world's largest fleet of US-flag vessels. As the city is bordered by multiple bodies of water, Norfolk has many miles of riverfront and bayfront property, including beaches on the Chesapeake Bay. It is linked to its neighbors by an extensive network of Interstate highways, bridges, tunnels, and three bridge-tunnel complexes—the only bridge-tunnels in the United States...Unless you're familiar with the bridge & tunnel (B&T) scene outside NYC that is. HA!

This is a NOAA ship. 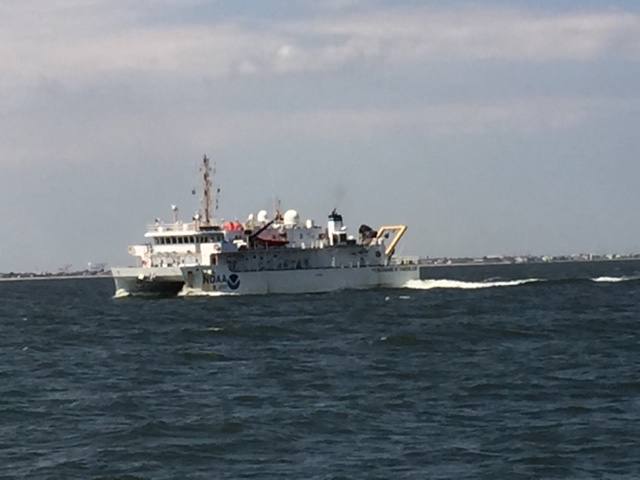 NOAA is a US federal entity and it's in charge of everything that has to do with the ocean. They produce the nautical charts, depth surveys, place hundreds of buoys around America that keep track of the weather, the water temp, the winds, the seas, etc. They have a great website that a lot of boaters use to check weather conditions prior to departing the dock. Kinda like the Google map car, but different.

The approaching El Niño we expect this winter is so strong, NOAA unofficially named it the “Bruce Lee” of El Niños after the late action movie hero. Hi-yah! 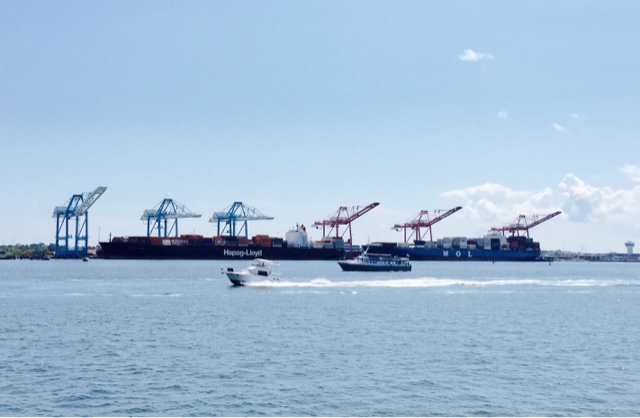 We saw hoardes of huge container ships being loaded right on base. A good crane operator can load / unload a container every two minutes, which amounts to 30 containers an hour. 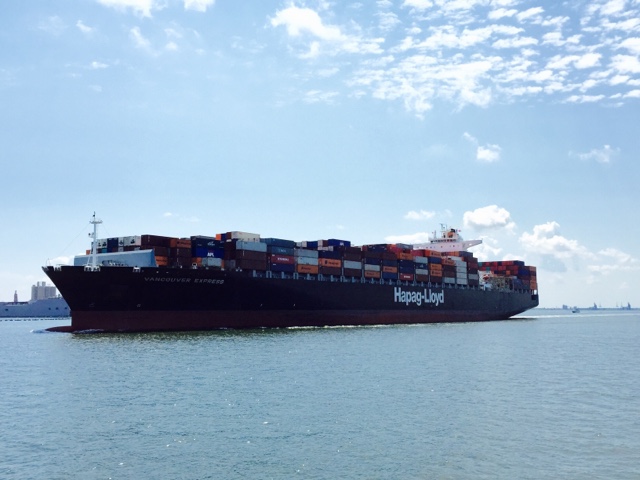 When they load a ship, they have to organize the load in such a way that the containers are removed easily according to location when the ship goes to its various ports of call. For example- if a boat is heading south down the eastern seaboard, the ones for Norfolk are on the top and the ones for Charleston are on the bottom, etc. 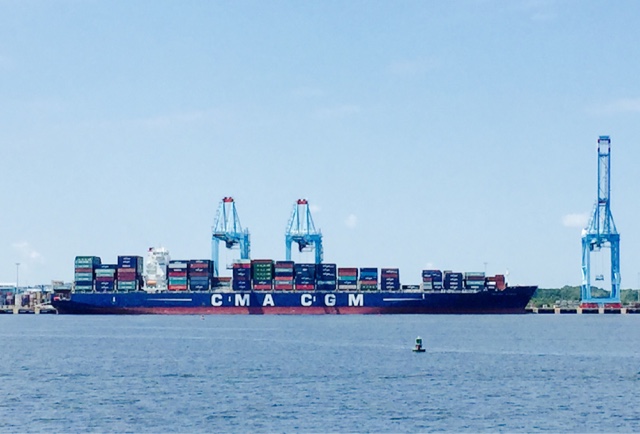 This is one serious navy town. Aircraft carriers, gun ships, you name it. 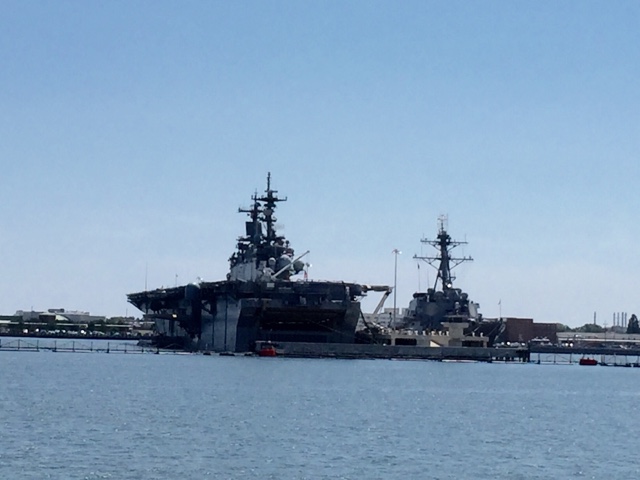 This tug has two jet engines on it & they are massive. Can you imagine how well those engines have to be wrapped so that they aren't exposed to any salt air?! 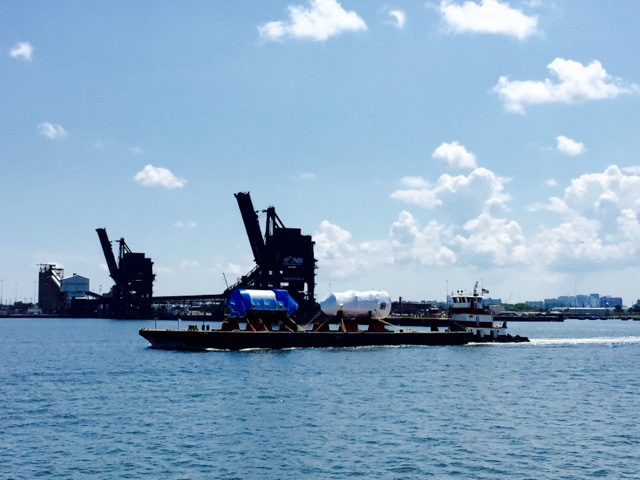 A Navy ship in dry dock below. It's a humdinger! 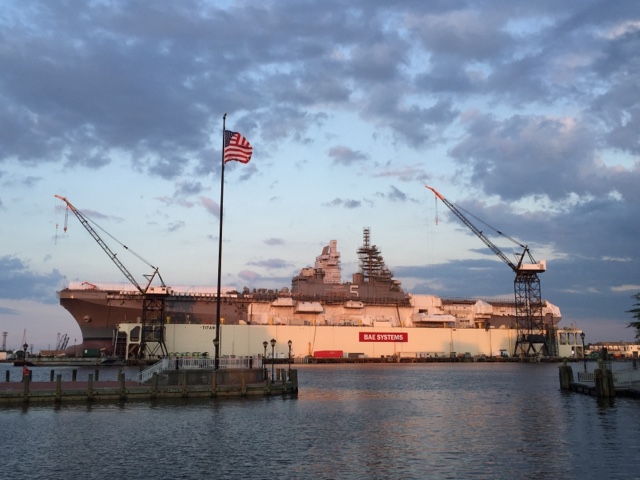 This is a loading facility that takes the coal from the trains' boxcars and loads it onto ships. 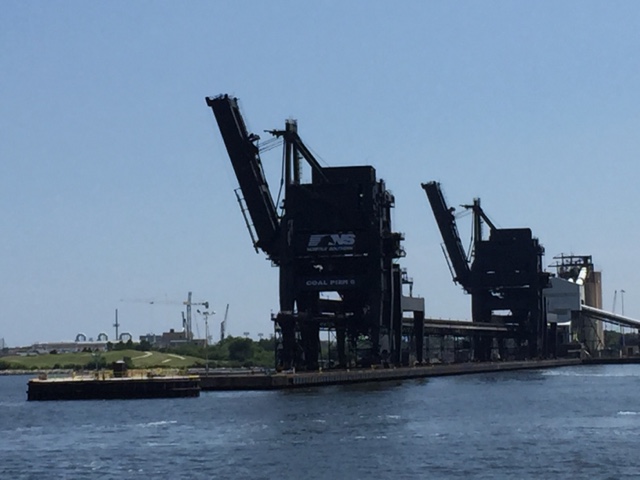 And finally, we pull into the Tidewater marina. 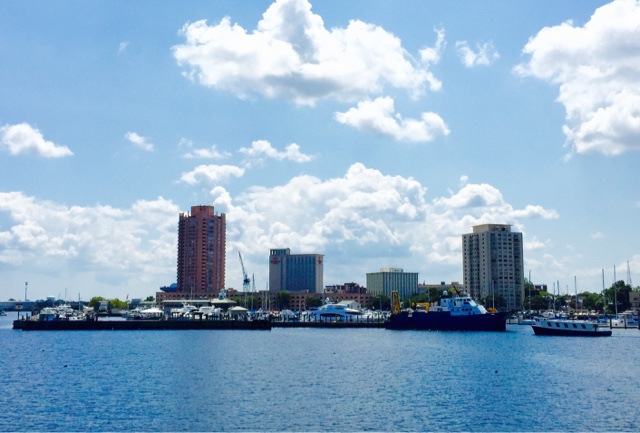 Another successful cruise!
Hard to believe we started out in Portland, Maine two weeks ago. We've been to quite a few states on this last journey. Maine, New Hampshire, Massachusetts, Rhode Island, New York, Virginia and passed by quite a few more.

This ship looks like it's used to measure seismic activity. So crucial... 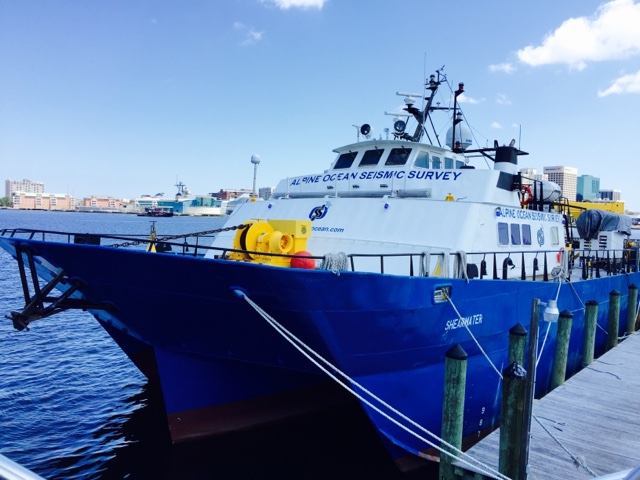 Thank goodness someone is keeping an eye on our shifting tectonic plates!

There was a great Sports Hall of Fame on the Portsmouth side of the harbor. 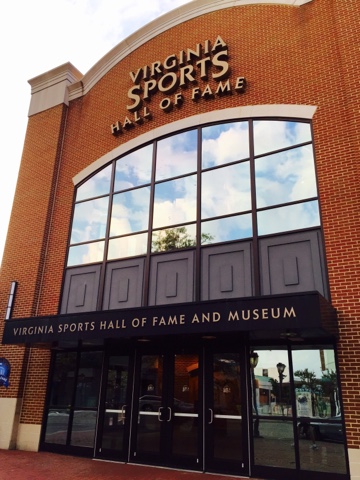 The old village reminded me of Savannah.
Historic and oozing charm, but with a definite edge in the neighborhood. (Hold onto your purse ladies.) 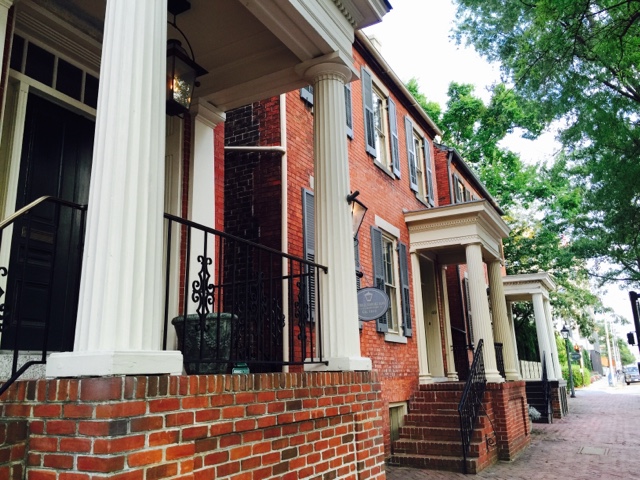 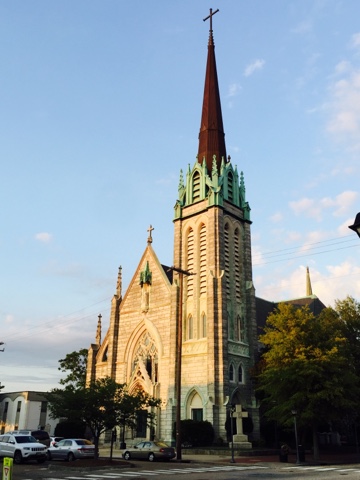 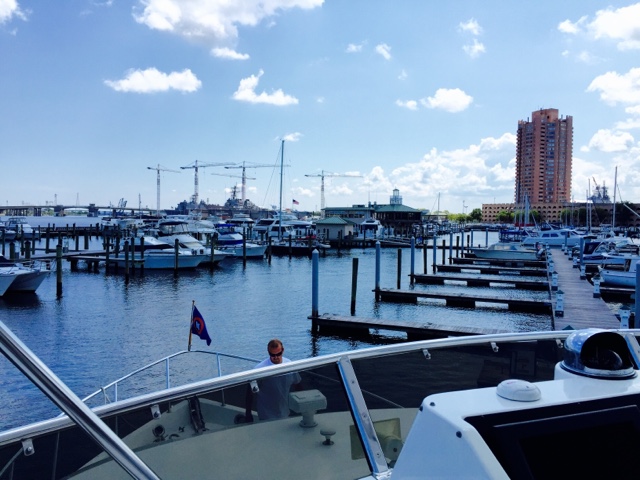 The marina even had a pool, which Bish will certainly be using while we are gone. Thank goodness, as it's a HOT sizzler in Virginia. 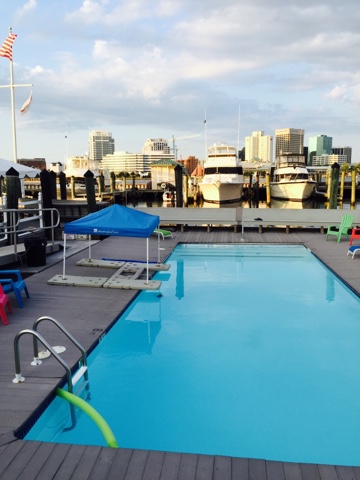 The light in the harbor was sublime! 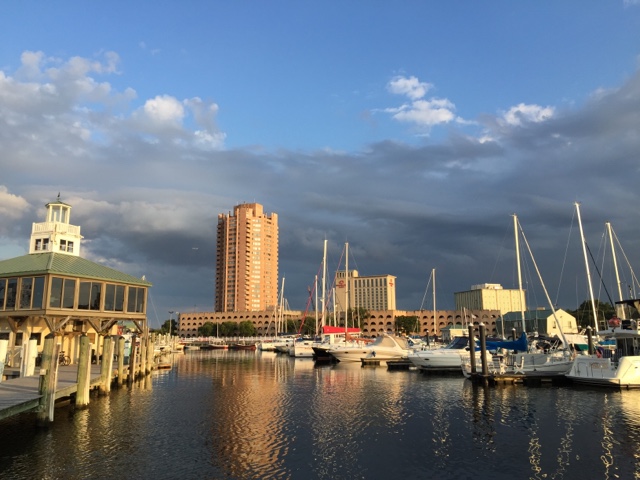 Looking back, we realized that we not only conquered cruising the east coast, but we have traveled through some of the most dangerous challenges it had to offer. We checked off every single one of those in the list below, with the exception of number 8.
But now... 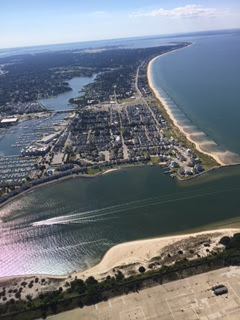 Until next time Virginia!

P.S. Virgina Is For Lovers. 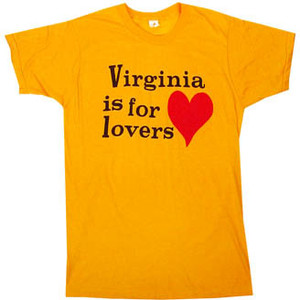