We headed south to Ixtapa / Zihuatanejo where and arrived Tuesday morning right when the fuel dock opened at 8am! The marina is not well dredged, and we only had barely a foot of clearance underneath the boat when we entered the harbor...Always an adventure in Mexico!

Dannys son Issac joined us for this run. He's 17 years old and wants to be a captain like his dad. Needless to say, Danny is trying to talk him out of it. Lol. Issac is a great kid and very well educated! He's quite helpful around the boat and will take the midnight bus back to Manzanillo.

There's a huge port in Manzanillo, so we passed a bunch of huge freighters. It's much more intriguing to see them up close during the day than a dot on the radar at night. 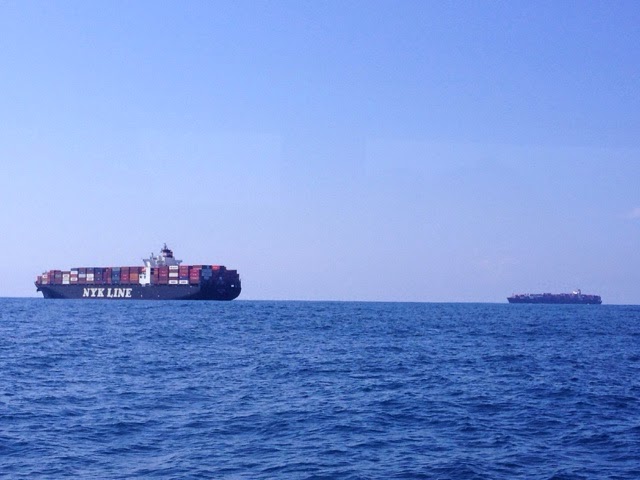 And with lines in the water and rods at the ready... Shazaam! I'm laying beside this beautiful blue marlin just to show how much longer it is than me. This little guy is tournament size! I'd love to take credit for reeling this baby in, but with two hairline fractures healing in my ribs that wasn't happening. However, I'm always at the ready to be a ham. 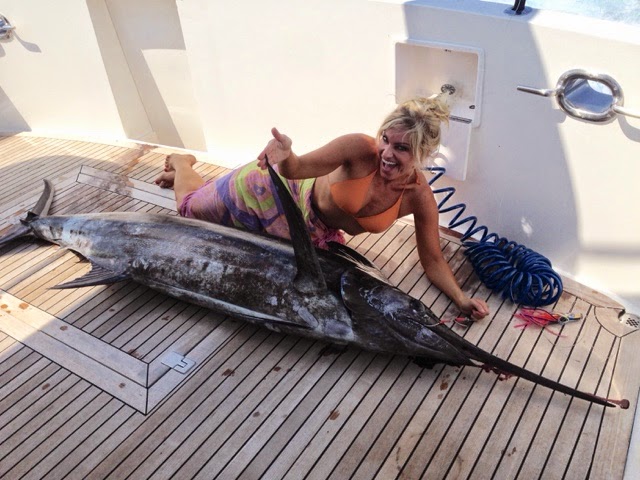 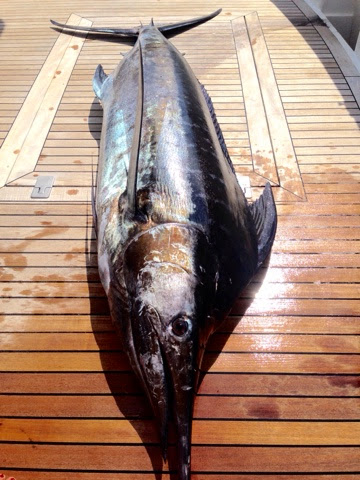 Issac on the rod in his fighting belt giving the fish a good fight...or was it vice versa? He was sweating buckets! Danny gave him lots of pointers. It took about 30 minutes to reel in which is nothing when you hear stories of 2 hour fish fights when a big one is on the line. Can you believe the water temp is 86 degrees? No wonder the fish wore out early.. Ha!  Issac and Danny took turns reeling it in while Brad expertly maneuvered the boat forward and then back. When catching a big fish you often have to reverse the engines & "back down" on it. This way we can get closer to the fish in order to get it into to the boat. The fish was swimming right behind our boat and got his bill caught in the trim tabs. It took him a few minutes to wriggle free. Then, (I hate to say this for you animal lovers) Danny took an aluminum fish bat and conks it on the head several times to knock it out. This is just how it's done and the best way for the fisherman to say safe. It's the food chain of life. Danny guesstimates the weight around 260lbs & it was approx 7 1/2 feet long if you include the bill. Holy guacamole! 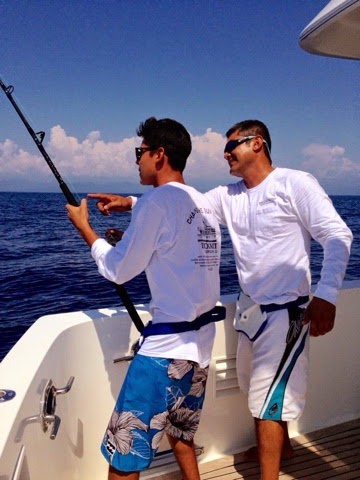 And Brad (aka Captain Jimmylegs) is ready for the money shot! What a beast this fish was...and perfect timing too. He was ready for a well deserved break. Brad had spent the entire afternoon running the boat and maneuvering around fishing lines and fish buoys that were placed far out in the ocean. Sometimes these buoys are strung together (which are often empty plastic gallon containers of milk) and can run for miles. Fishermen have strings of lines with hooks and bait all along them...Crazy right? 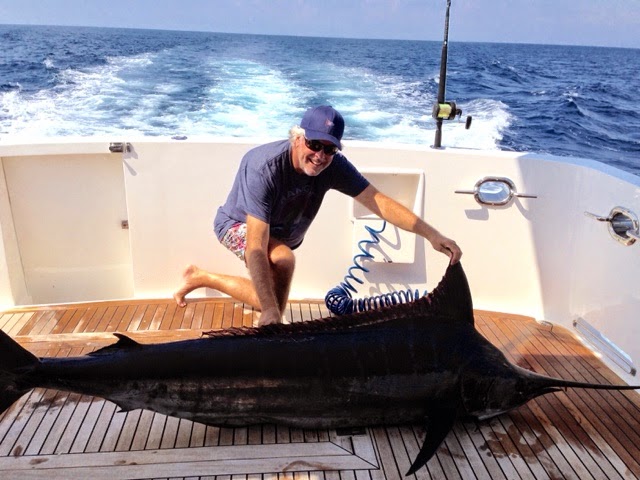 Danny is ecstatic with our catch... He laid down next to it and had the biggest smile on his face ever! So exciting to witness and he was a pro at getting this big blue aboard. What a day!! 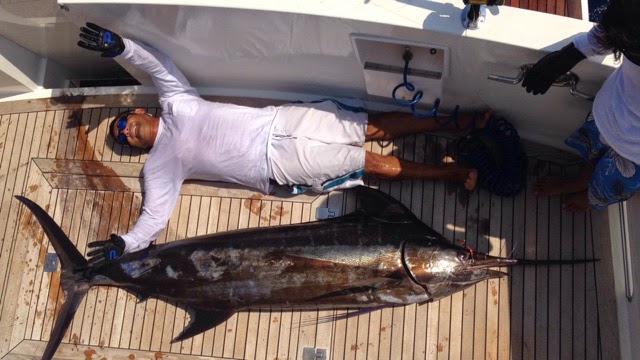 Here's the video of all the action;
http://www.youtube.com/watch?v=nlORYJobbcM

Email ThisBlogThis!Share to TwitterShare to FacebookShare to Pinterest
Where we're at: Ixtapa Ixtapa